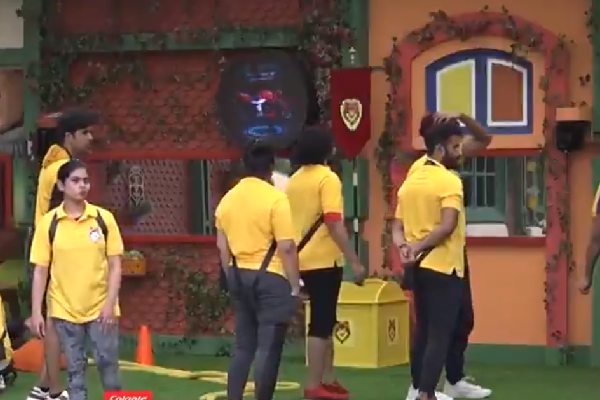 Vishwa is the second captain:

In Big boss season 5, Vishwa selected as captain today. After playing various tasks for the last three days, it was the time to select the new captain. Sriram’s team won over Manas team in the tasks and so Big boss asked Sriram to select four contestants who played well during the tasks and can be the contenders for the captaincy task. Hamida, Priyanka, Annie master and Vishwa were selected for the captaincy task. These 4 contestants played another task, Vishwa won the task and became captain of the house.

Lobo and Uma started separate track today and were seen flirting with each other. However contestants like Ravi pointed out that their behaviour looks like acting instead of a real chemistry. Later Big boss gave a task to Lobo and Uma and announced that who ever wins the task will get the single bed which has been locked since day 1. In fact these two folks don’t have a bed in the house. Uma has been sleeping on a sofa and Lobo has been sleeping on the floor.

Lobo and Priyanka played a comedy skit in which Lobo acts as an auto driver and Priyanka acts as a beggar who fakes like a rich person. The skit was hilarious and the housemates gave standing applause for Lobo.

On the other hand Uma and Siri played another skit in which they acted like mother-in-law and daughter-in-law . Even though both of them acted well, the skit was so old fashioned.

After watching both the skits, housemates selected Lobo skit as the best skit by vote. But after winning, lobo offered the bed to Uma and told he will continue to sleep on the floor. But Uma, did not agree for that.

Birthdays of Shweta Verma and Shanmukh were celebrated in the bigg boss house today. Sweta became so emotional after seeing parent on the video call.

Most of the people who follow social media know that bigg boss season two contestant Deepti Sunaina is the girlfriend of big boss season 5 contestant Shanmukh. On the occasion of his birthday, Shanmukh received a pleasant surprise from Big boss who arranged video byte with Deepti Sunaina. He became emotional while watching it.

Overall the episode was good.