Natural Star Nani is completely into a mass hangover in his next film Dasara. The film presents him in a new and never-seen light. The actor plays a Telangana youngster who works in Singareni coal mines. Dasara is said to be a rustic and intense love story. The first single ‘Dhoom Dhaam Dhosthaan’ is released and it is a packed mass number. Nani thrills in a de-glam role with a new hair look in a lungi. Santosh Narayanan composes a new sound and Dhoom Dhaam Dhosthaan gives a new experience. This song is not a great catchy number but will impress the masses in theatres.

A bunch of singers crooned for this mass song. Dhoom Dhaam Dhosthaan is shot in a special set that is constructed for the film. A bunch of dancers are seen shaking their legs with Nani in this song. Dhoom Dhaam Dhosthaan is shot in a small village-based bar setup. Keerthy Suresh plays the leading lady and her look is kept under wraps. Sudhakar Cherukuri is producing Dasara, the costliest film made in Nani’s career. Dasara is announced for March 30th, 2023 release in all the Indian languages. 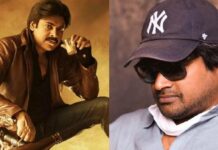