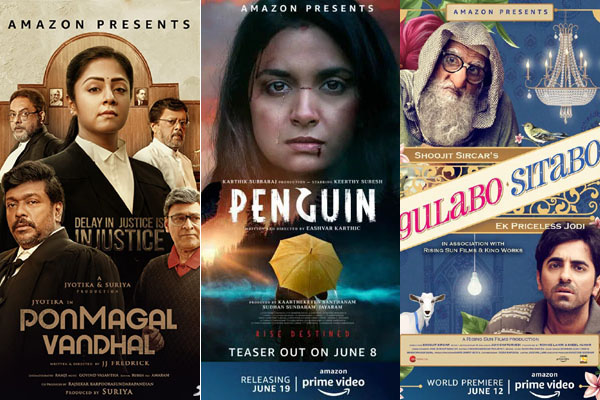 Digital giants like Amazon Prime and Netflix are all excited after several filmmakers approached them to release their films on the platforms as the theatres are closed due to coronavirus. Taking this as an opportunity, the digital platforms shelled out crores of money. But if we analyze the recent releases, none of the films lived up to the expectations. Right from Gulabo Sitabo to Jyotika’s Ponmagal Vandhal to today’s release Penguin, the netizens and digital audience made it clear that these films would end up as flops if they had a theatrical release. All the recent releases received poor to mixed response from the audience.

Telugu films like Amrutharaman, Raahu and others are rejected badly by the audience. Navdeep’s Run that released on Aha received a mixed response. Naveen Chandra’s Bhanumathi Ramakrishna is releasing on Aha in July. Jhund, Laxxmi Bomb, Gunjan Saxena, Chhalaang, Shakuntala Devi and Coolie No 1 are the Hindi films that are heading for digital release soon. We have to wait to see if some of these films end up impressive living up to the expectations.