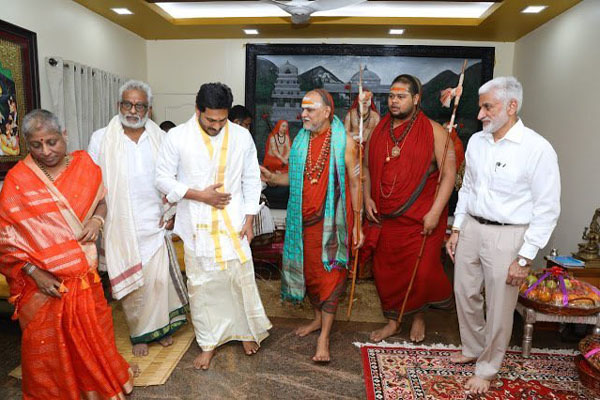 They are mutually contradictory events. The workers unions and the political parties are agitating at the Visakha Steel Plant against the privatisation move. Sarada Peetham is celebrating its anniversary. AP Chief Minister YS Jaganmohan Reddy gave more importance to the Peetham during his current visit to the port city.

The Chief Minister just met the protesting workers’ unions of the Visakha Steel Plant at the airport for a brief time. Later, he made an elaborate visit to Sarada Peetham this time. Though a Swamiji, Swaroopananda is more like a political guru for the CM from the beginning. He was also a friend, philosopher and guide for KCR. Opponents have criticised that the AP CM and his Ministers have been taking all the blessings of the Vizag false Swamiji in order to loot and plunder the assets in the port city limits.

Despite rising criticism, Mr. Jagan Reddy attended the Sarada Peetham anniversary. He offered prayers at the Raja Shyamala Ammavari Temple. He took part in the Raja Shyamala Yagam. The CM also visited the Subrahmanyeswara Swamy Temple and also the Tandava Murthy Temple there.

The Chief Minister inaugurated the website of the Vizag Sarada Peetham. He offered prayers at the Dasanjaneya Temple. The Chief Minister felicitated the veda pandits. Mr. Jagan Reddy made a prolonged visit in which he also took part in the Gopuja and Yaga rituals there.

The Veda Pandits have given their blessings for the Chief Minister with all the strength to achieve his Government’s goals for the State.