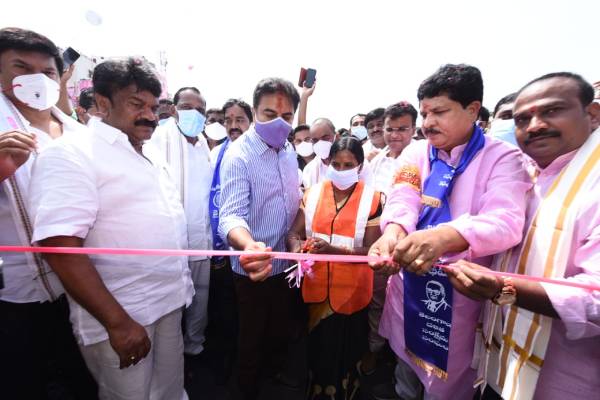 Telangana IT minister KT Rama Rao on Tuesday sprang a surprise by asking a woman labourer to cut the ribbon to inaugurate the Balanagar flyover in Hyderabad.

KTR was invited as the chief guest to inaugurate this long-pending flyover.

After KTR arrived at the inauguration site, he spoke to few woman labourers who were present there.

They told KTR that they have been working on this site for the past two years.

KTR was impressed by Shivamma, a labourer hailing from Manigala village in Wanaparthy district, who told how they contributed to the speedy completion of this delayed project over the past two years.

Soon after, KTR asked Shivamma to inaugurate this flyover to everyone’s surprise.

KTR handed over scissors to her to cut the ribbon. After inauguration KTR said recognising the hardwork of labourers and respecting labourers amounts to respecting ourselves and thanked Shivamma for inaugurating the flyover.

The works on massive 1.30 kilometre six-lane flyover aimed to ease traffic woes in highly congested Balanagar area started in 2017 at a cost of Rs 387 crore but was delayed due to land acquisition issues.