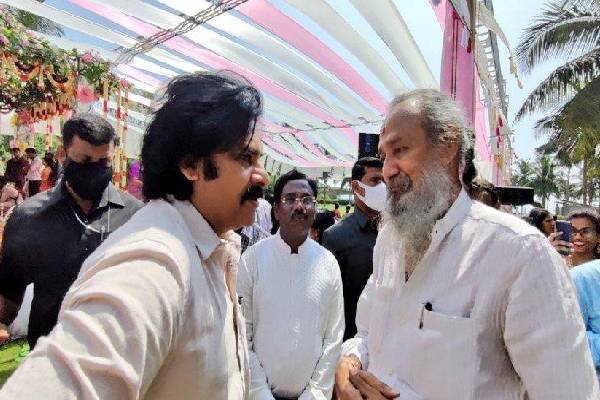 Powerstar Pawan Kalyan is on a break and he is all set to resume the shoot of Hari Hara Veera Mallu which was delayed due to Pawan’s commitment for Bheemla Nayak. The shoot resumes on April 4th and Pawan Kalyan will complete a long schedule for the film in April. Krish is the director of this periodic drama and AM Rathnam is the producer. Legendary art director Thota Tharani garu is supervising the set work for Hari Hara Veera Mallu.

Multiple sets are constructed and the rest of the shoot will be completed in these sets. The sets are constructed in Aluminium Factory. The makers also released a click of Pawan Kalyan with Thota Tharani garu. Hari Hara Veera Mallu is the costliest film in Pawan’s career and the makers are keen to release the film for Dasara this year. MM Keeravani is composing the music and Nidhhi Agerwal is the heroine.