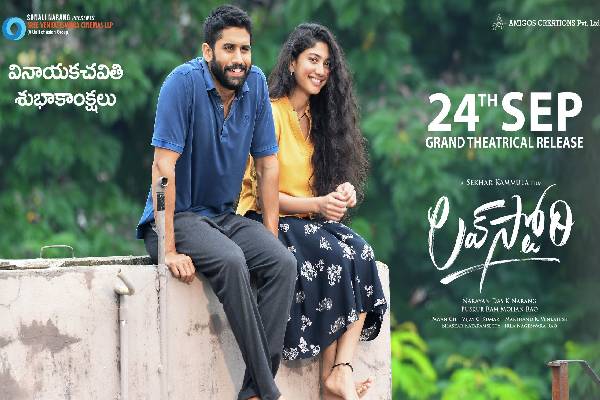 Gopichand’s Seetimaarr is the first big-ticket film that released after the second wave of the coronavirus pandemic. The film opened with a bang and it is expected to have a good weekend across the Telugu states. Naga Chaitanya and Sai Pallavi starrer Love Story was initially announced for September 10th but the release was later pushed. The makers today announced that Love Story will hit the screens on September 24th across the globe. The theatrical rights of the film are sold for record prices.

With the coronavirus cases coming down, the makers of Love Story decided to release the film in theatres. Sekhar Kammula is the director and Sree Venkateswara Cinemas LLP are the producers. The released singles already garnered a decent response from the audience. Chaitanya and Sai Pallavi plays the roles of Telangana youngsters. Chaitanya is specially trained to speak in the Telangana dialect for Love Story.

Team #LoveStory wishes everyone a Safe and Happy Vinayaka Chaviti.