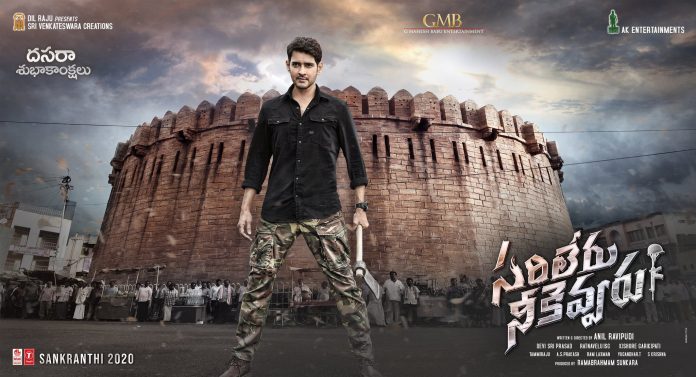 Princeton, NJ: Oct 11th 2019: Great India Films is happy to announce that we are releasing the much awaited Telugu movie Sarileru Neekevvaru in Overseas, Starred by superstar Mahesh Babu directed by F2 Fame Anil Ravipudi and produced by AK Entertainments, GMB Entertainments & SVC. Sarileru Neekevvaru will be releasing in grand scale in Overseas with premiere shows for Sankranthi 2020. We encourage movie lovers to enjoy the film on the big screen near you.

Sarileru Neekevvaru is promised to be a wholesome entertainer with Super Star Mahesh in an entertaining role. Latest heartthrob Rashmika Mandanaa is pairing up with Mahesh coupled with sizzling appearance in a dance number by two top heroines. Lady Amitabh Vijayasanthi is back to the silver screen  donning an important role in this film. Sarileru Neekevvaru also boasts prominent cast like Prakash Raj, Rajendra Prasad etc.. Music by Devi Sri Prasad and Cinematography by Rathnavelu.

We thank producer Anil Sunkara garu, Kishore Garikipati, Dil Raju Garu, Director Anil garu and our charming and evergreen prince and Superstar Mahesh Babu for handing over the release of Sarileru Neekevvaru in Overseas to Great India Films. We also like to extend our thanks to our friends and well-wishers,  all Mahesh fans across the world and movie lovers for their continued support.