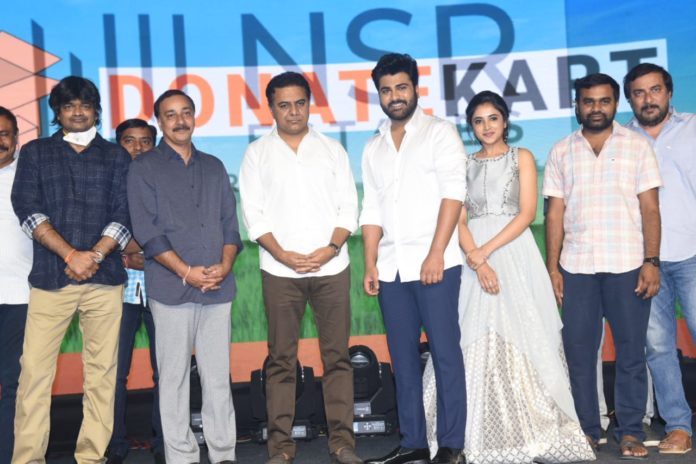 Director Kishore B said that KTR is one of the great inspirations for him to make the film of this kind. He thanked hero Sharwanand for accepting to do the film.

Sharwanand said, “We know how busy KTR is. We wholeheartedly thank him for taking his time and gracing the occasion to bless us. I certainly feel that the concept of farmers issue made him to attend the function. KTR is a youth icon not just for this state but for the entire country. When I messaged requesting KTR to attend the event, he called me immediately and assured to grace it. No other politician will respond this fast.

The story is about how a son wants to take up farming as an inheritance from his father. If it’s my responsibility to do this film, it’s equally your responsibility to watch Sreekaram. Kishor penned a wonderful story, while Sai Madhav Burra brought life with his thought-provoking dialogues. I couldn’t listen to story for nearly 6 months due to busy schedules. I’ll always be thankful to my producers Ram and Gopi for waiting for me. We may score big commercial hits. But we rarely get films like Sreekaram.”

KTR said, “I have watched Sreekaram teaser and also 9-minute video of the film. I was really blown away. Sreekaram is a film made with real heart. I liked the simplicity of director Kishor who is very young but passionate. We should appreciate the producers for making this film. Making a films like Sreekaram in a commercial way is not a simple thing. Interestingly, while Sharwa made his first debut with Gamyam, his director Kishor is debuting with Sreekaram.

There is no real support for the farmers in many places in the country. Even we are doing something for the farmers in the state; we still feel it’s not enough. Our Chief Minister KCR is a passionate farmer who loves doing farming. He always thinks about the wellbeing of farmers.

Youngsters should help farmers by pressurizing government on welfare schemes. I honestly feel that there is no small or big film. Sreekaram is a film with big heart. I hope it reaches all the expectations.”

KTR also stated that he will look for the possibility of giving tax exemption for the film releasing in a couple of days.