TRS leaders even went to the extent of giving leaks to media stating that KCR will campaign in UP Assembly polls in support of Samajwadi Party.

If KCR cannot make it for any reason, he will send KTR and a team of TRS leaders to Uttar Pradesh to campaign for Akhilesh, they claimed.

But now, TRS leaders are maintaining complete silence of UP Assembly polls. This led to speculations that there are ‘political reasons’ behind TRS turning silent on UP polls.

And these political reasons are nothing but Owaisi brothers of AIMIM, who reportedly stopped KCR and TRS from supporting Akhilesh or involving in UP Assembly polls.

AIMIM and TRS are friendly parties in Telangana. The AIMIM is helping TRS to get Muslim vote bank in favour of TRS in all elections. The AIMIM is confining only to Old City and not contesting elections in other districts to benefit TRS by ensuring there is no split in Muslim vote.

Now AIMIM is contesting in UP polls. It has decided to contest 100 out of total 403 Assembly seats on its own as its efforts to forge alliances with other parties failed. AIMIM does not want TRS to work in favour of Samajwadi Party in UP. 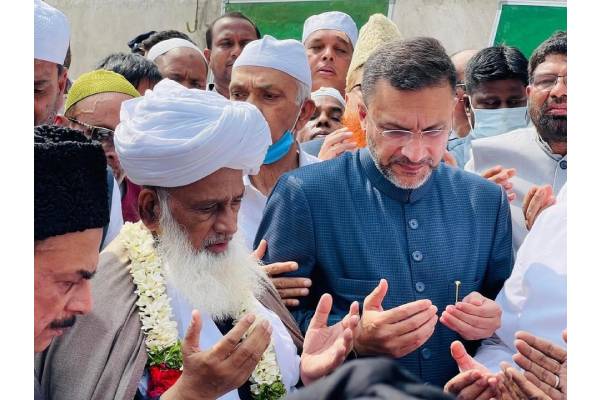 Foundation stone was laid on Thursday for re-construction of two mosques in Telangana’s new state secretariat premises, five months after they were razed during demolition of the old secretariat buildings.

The ceremony was kept simple and the general public was not allowed to participate in view of the ongoing construction of new secretariat complex.

The state government allotted 1,500 yards for the two mosques, which will be built at a cost of Rs 2.9 crore. The home minister said the government will fulfill its promises and two mosques would be among the most beautiful mosques in the country.

Two mosques and a temple were razed during the demolition of old secretariat buildings located near Hussain Sagar lake in the heart of the city.

Chief Minister K. Chandrasekhar Rao had expressed his regret over the incident. He had claimed that the places of worship were damaged due to the fall of the debris on them.

The chief minister had promised to rebuild the place of worship on more spacious sites and at the government’s cost.

On September 5, the chief minister announced that the government will rebuild mosques and a temple along with a church in the new secretariat complex.

He made the announcement after delegations of Muslim and Christian leaders called on him separately. Christian leaders had informed the chief minister that church services used to be held in the old secretariat.

Rao assured the delegations that he will lay the foundation stone for all three places of worship on the same day in true spirit of communal harmony for which Telangana is known and will ensure their speedy completion.

Leaders of various Muslim organisations have been expressing concern over the delay in construction of mosques and on several occasions urged the state government to start the work without further day.

The chief minister is likely to lay the foundation stone for the temple and the church at a later date.

Ahead of the GHMC polls, there seems to be friction between the ruling TRS and its ally AIMIM.

AIMIM leader Akbaruddin Owaisi made controversial remarks that the memorials of former prime minister PV Narasimha Rao statue and tomb of former chief minister and iconic matinee idol NT Rama Rao on Hussain Sagar need to be razed as they occupied several acres. He said the the land belonging to Hussainsagar has drastically shrunk from 4,700 acres to 700 acres.

AIMIM MLA Akbaruddin Owaisi also criticised the TRS government stating that it had failed to hand over the double bedroom houses to the poor as they promised during the previous election. “The government is making the same promises for the poor which made during the last election in the state” he added.

IT and MAUD Minsiter K T Ramarao was quick to react. He condemned the remarks made by Akbaruddin Owaisi stating that both PV and NTR are legendary sons of the soil. “P V Narasimha Rao was the former prime minister and NTR was the CM. The remarks made by Akbaruddin Owaisi are in bad taste and highly condemnable. The contribution of PV and NTR are undoubtedly unparalleled. They have relentlessly worked for the cause of Telugu community and made honest efforts to uphold the dignity and pride of Telugu people. It is most unfortunate that Akbaruddin Owaisi made such comments. We condemn the remarks in the strongest terms. Such comments are unacceptable, KTR said.

AIMIM party is contesting in 51 divisions out of 150 in the ensuing GHMC election unlike for 60 seats in 2016. 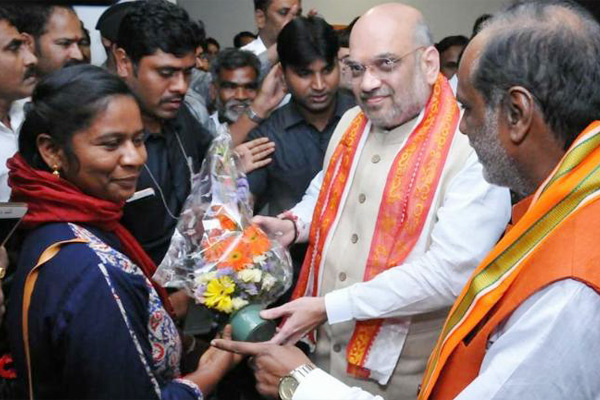 In Hyderabad Old City, BJP has come out with a big surprise to take on what it calls a ‘communal Majlis party’ in the elections. The party is fielding a 25-year-old Muslim woman against Majlis leader Akbaruddin Owaisi in Chandrayanagutta assembly constituency.

Seyd Shahjaadi’s name has already been announced for the seat and she has been campaigning hard, saying that she will work for the protection of the rights of women in the segment. She has also raised the issues of Arab sheikhs coming to some areas in the segment and exploiting innocent Muslim women in the name of marriages.

BJP leaders are thinking that there is a pro-BJP mood among Muslim women across the country because of their policy against Triple Talak system. By fielding an educated woman, the party wants to attract women voters in Old City.

Why MIM praise for KCR? 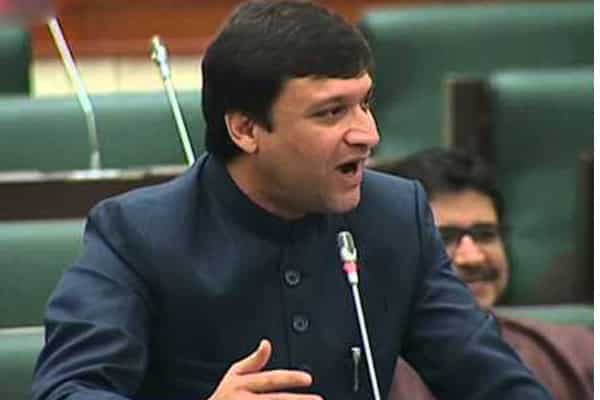 Political observers in Telangana are miffed at the way Chief Minister K Chandrasekhar Rao is trying to win over hearts and minds of Muslims in the name of inclusive governance. Since he came to power, he has been implementing many welfare schemes and programmes for socio-economic uplift of minorities in the state.

Notable among these are a marriage scheme called Shaadi Mubarak; uniform income ceiling for availing of welfare schemes; skill development training, reimbursement of tuition fees and scholarship schemes; age limit relaxation (21 to 55 years) for self-employment and increase in budgetary allocation.

In recent weeks, KCR has added some more to the long list of benefits being showered on the minorities. Some of them are: an exclusive industrial estate and IT corridor for Muslims in the state; Hyderabad International Islamic Cultural Convention Centre on 10 acres on city outskirts; subsidy for self-employment units; 10 percent quota in the double-bedroom housing scheme; strengthening of the Minority Development Corporation, Urdu Academy and the Wakf Board; new residential schools and hostels.

Until now, all these welfare measures have attracted little attention. But what has happened in the last few days in the State Assembly has become a topic of intense public and political discussion. While the House witnessed some interesting scenes that were reminiscent of royal durbars, KCR, once again, declared his unwavering commitment to minorities’ welfare and unveiled a slew of measures for their economic uplift. On the other hand, MIM floor leader Akbaruddin Owaisi showered praise on the CM. Their emotion-filled sentiment-laden speeches and statements looked and sounded like those coming from members of a mutual admiration society.

The question being asked is why KCR going out of his way to woo the Muslims who constitute 12 per cent of the state population two years ahead of Assembly polls? Is it really necessary for him and his party to appease MIM?

Really speaking, with his party’s formidable position in the Assembly, and the kind of ‘wave’ he is sailing on, KCR is assured of next victory. But, according to political pundits, KCR doesn’t want to take any chances with the electorate. TRS seems to have other long-term objectives in mind. Muslim support and vote count during a political crisis. Dozens of welfare schemes for Muslims have already generated tremendous goodwill for KCR and this groundswell is a scoring point for him in future political battles.

Interestingly, the turning tide is unnerving for MIM which thrives on the belief that it is the one and only representative body of Telangana Muslims. But its recent setbacks in local and Assembly polls in other states like Maharashtra, Tamil Nadu, Bihar and Uttar Pradesh when it tried to expand its footprint beyond the Old City might have made it more circumspect on its home turf.

Fearing it could lose its support, MIM seems to be throwing its weight behind TRS – in an unabashed manner. The reason, it is suspected, is MIM is in some sort of quid pro quo deal with TRS. If it is, it will unfold in the coming days. 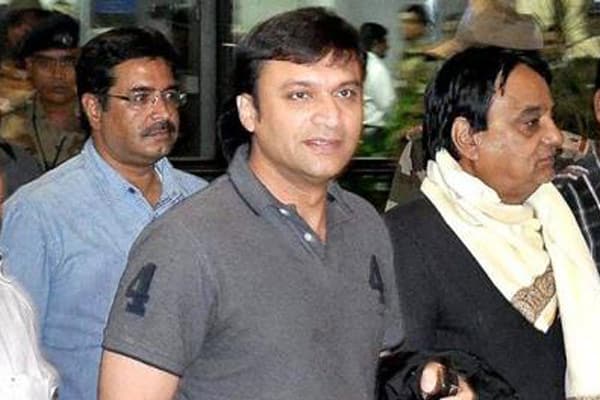 A court here on Thursday sentenced four accused to 10 years imprisonment for the 2011 attack on AIMIM legislator Akbaruddin Owaisi.

The convicts and other accused already have spent six years in jail. The accused were brought to the court from Chanchalguda jail.

Owaisi was critically injured in the attack by Mohammed Pahelwan and his family members in his Chandrayangutta assembly constituency in the Old City of Hyderabad on April 30, 2011.

One of the attackers, Ibrahim Bin Yonus Yafai, was killed when Akbaruddin’s guard opened fire to save him.

Akbaruddin Owaisi, younger brother of AIMIM President and Hyderabad MP Asaduddin Owaisi, is the floor leader of the party in the Telangana assembly.