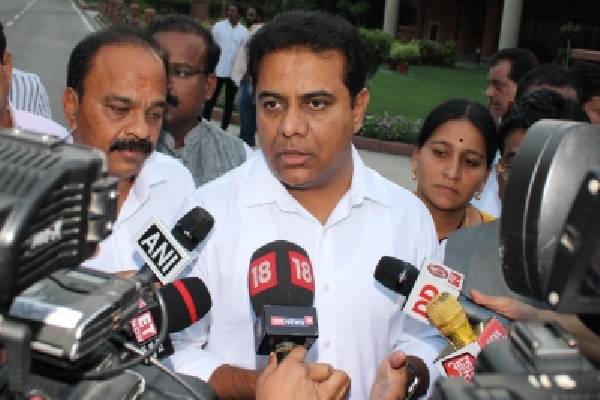 Telangana’s Industry Minister K.T. Rama Rao has urged the Centre to allocate funds in the Union Budget 2021-22 for development of handlooms and textiles in the state.

He said that Kakatiya Mega Textile Park (KMTP) at Warangal would take off in 2021-22. “KMTP is being developed at a total estimated project cost of Rs 1,552 crore of which the core infrastructure works would cost approximately Rs 1,094 crore. We have aligned our project activities such that major external and internal infrastructure works at KMTP can be taken up immediately upon receipt of the proposed financial support under the Mega Textile Park scheme,” he said.

“Under the proposed scheme, we understand that a total of Rs 500 crore capital support is available for a Mega Textile Park. We request that approximately Rs 300 crore of this amount be released at the earliest to kick start major external infrastructure works urgently needed at the park,” wrote KTR, as the minister is popularly known.

Noting that there are 35,588 power looms in Telangana, the minister said 25,495 of them are in Sircilla district alone.

KTR urged Irani to sanction a mega powerloom cluster at Sircilla and sanction Rs 49.84 crore out of the projected outlay of Rs 993.65 crore towards filling various gaps and to implement the components including infrastructure gaps, modernisation, and expansion of production base, strengthen of value chain, market development, skill development and capacity building and administration studies and project monitoring costs of textile park, weaving and apparel park at Sircilla.

He also sought sanctioning of the Indian Institute of Handloom Technology (IIHT) for Telangana as the state has no such institute offer a course in diploma in handloom technology, and aspirants have to go to neighbouring states such as Andhra Pradesh, Orissa, Tamil Nadu, Karnataka to acquire admissions in an IIHT.

He further stated that sufficient land with a constructed building facility is available at Handloom Park, Pochampally, Yadadri Bhongir district for the establishment of the IIHT.