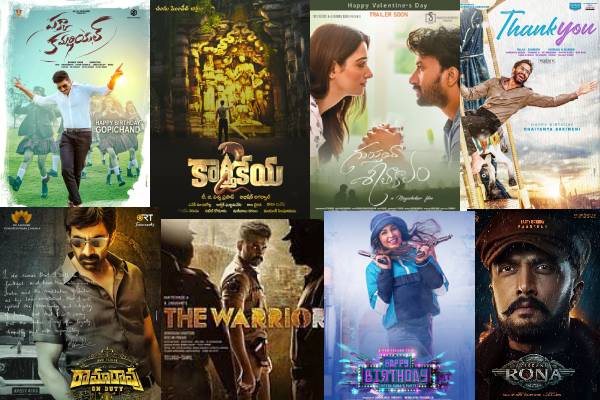 The summer season came to an end and June too did not witness impressive hits except Vikram and Major. Tollywood will have a packed July as there are ten films hitting the screens. Gopichand’s Pakka Commercial and 10th Class Diaries are hitting the screens on July 1st. R Madhavan’s Rocketry: The Nambi Effect will have a pan-Indian release on July 1st. Energetic Star Ram will test his luck with The Warrior and the bilingual is heading for July 14th. Mythri Movie Makers attempted a small film Happy Birthday and the film will release on July 15th.

Satyadev and Tamannaah starrer Gurtunda Seethakalam will have a theatrical release on July 15th. Naga Chaitanya’s Thank You which was announced for July 8th is now pushed to July 22nd. Nikhil’s Karthikeya 2 is made on a massive budget and the film will release on 22nd. Kannada Superstar Kicha Sudeep’s film Vikrant Rona will have a theatrical release on July 28th and the trailer looked impressive. Ravi Teja’s Ramarao On Duty will release on the last Friday of the month. July is completely packed with several releases.