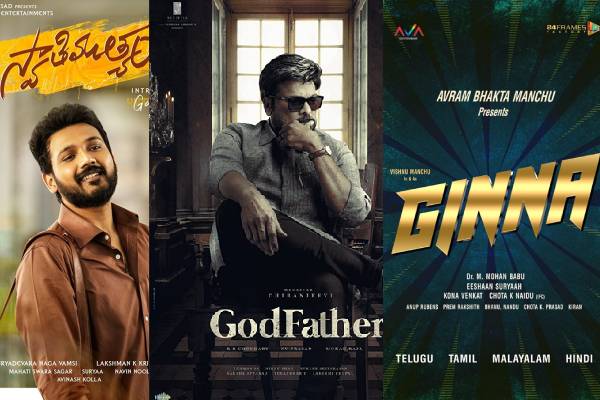 Megastar Chiranjeevi and King Nagarjuna are heading for a mighty clash on October 5th with God Father and The Ghost. Both these films are heading for a direct clash which never happened in the past. In a surprise, Manchu Vishnu’s Ginna is releasing on the same day. Bellamkonda Ganesh Babu’s debut film Swathi Muthyam is also releasing on the same day. The young actors are not much bothered about veteran actors like Chiranjeevi and Nagarjuna.

Manchu Vishnu has been struggling for success and Ginna would be an important attempt for him. He needs to score a hit at any cost and heading for a solo release would make a difference. Debutant Bellamkonda Ganesh too will have to make an impact with his first film to stand in the race. Both Ginna and Swathi Muthyam will open on a dull note for sure as there are biggies in the race. But the makers of these films are quite confident on the content and they are heading for direct clash with God Father and The Ghost. Couple of other small films are releasing on Friday and the announcements are expected. The Tollywood audience will have a bunch of options for this Dasara and its time to see which film fares well among these announced releases.