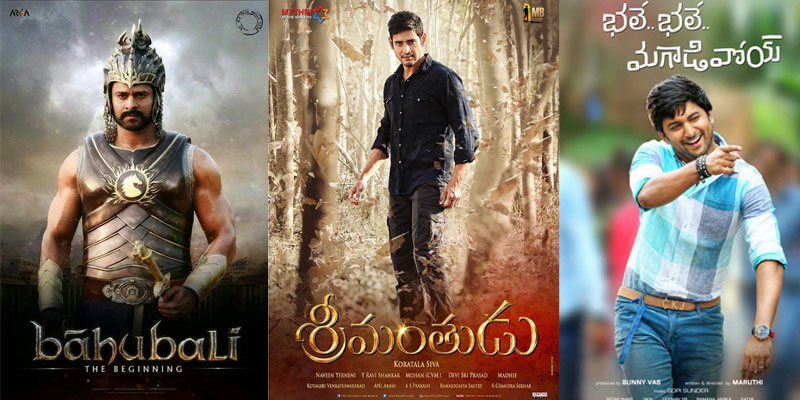 [intro]After a long time, Tollywood has shown the way to anchor the audiences’ eyeballs and belt out massive hits, back-to-back.[/intro]

The satellite rights of “Bhale Bhale Mogadivoi” were bought by MAA TV for Rs.3.6 crores. That’s more than half as much as the producers would have incurred for the entire movie. The distribution rights of BBM were sold for Rs.50 lakhs in the USA but the Share has crossed 2.5 Crores ( Gross being 6 Crores) – a Return of Investment (RoI) of 500 per cent in USA ! Overall, the film is expected to do a total worldwide share of Rs.22-24 Crores(excluding satellite rights) which means an overall RoI of 400 pc! With such a runaway hit where the concept of “mind diversion” has found an instant rapport with the audience, the producers of the film will be encouraged to dub the movie in Tamil and also remake the film in Hindi – for which they have to find a suitable actor who can carry the film as well as Nani – say someone, like Ranvir Kapoor or Ranbir Singh or even Aamir Khan.

Infact, think about Aamir Khan teaming up with Geetha Arts, one of the producers of BBM – it may not be a bad idea to remake BBM as the sequel to Ghajini and name it as Ghajini-2. The success of BBM completes a golden quarter for Tollywood which wipes out a multi-year deficit of flops outnumbering hits. In a film industry which makes the second-highest or often, the highest number of films per year, the success ratio has gone below 4 per cent in recent years, but this season – two big-budget films – “Bahubali” and “Srimanthudu” and two small-budget films “Cinema Choopistha Maave” and “Bhale Bhale Mogadivoi” scored bumper hits though the RoI on these films varies largely. While BB may have given an RoI of 100 per cent or above (which includes the budget of second part and the interest cost), “Srimanthudu” gave an RoI of 200 pert cent (Rs. 80 crores on a budget of Rs.40 crores), CCM an RoI of 200 per cent (Rs.10 crores on Rs. 5 crores budget) and BBM an RoI of 400 per cent.

What is common to the success of the four films? Good story and starcast relevant to the content of the film. Excellent production values despite the different budget constraints. Entertainment that is enmeshed with the storyline. Absence of loud and iconic comedians like Brahmanandam who can inflate the budgets per day of shooting. Hit music and rich cinematography. Besides all the above factors, the marketing of all the four films was done brilliantly with small changes. In case of “Bahubali“, the marketing methods have already entered the hall of fame and will be talked about for long time. “Srimanthudu” which came after “Bahubali” made relevant noise with the teaser and music and publicity blitz which included pre-release interviews by the lead actors. “CCM” released a trailer with “Srimanthudu” and the promos of the film made it stand apart like a fun film to watch. “BBM” started airing promotional videos atleast four weeks before its release – an unprecedented move from a low-budget film.

In the end, all of these paid off big time, paving way for a golden year for Tollywood. If these four films could pull it off in a post-summer quarter, optimism is at a new high for film-makers as more releases are lined up for the upcoming busy festival season. Tollywood is on a new high and enjoying the highest visibility in the country with blockbuster hits like “Bahubali” and “Srimanthudu” and hits from low-budget films. Something that has become the envy of even Kollywood – which has had a bad year with a string of flops for all the leading superstars like Rajinikanth, Suriyaa, Vikram and Kamal Hassan. After a long time, Tollywood has shown the way to anchor the audiences’ eyeballs and belt out massive hits, back-to-back.