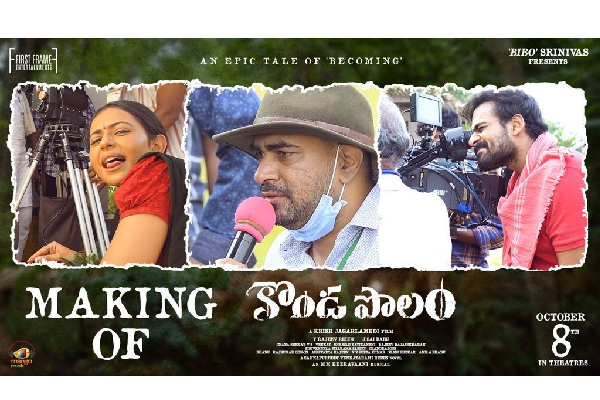 Panja Vaishnav Tej’s Konda Polam after that stunning debut with Uppena is all set to surprise audience with another unique subject – Konda Polam on October 8th as Dasara Special.

The team has released the special making video of the film today at the Pre-release event giving us a glimpse of the adventurous world of Konda Polam and the hard work the team has put into it.

The first noticeable thing about the video is the stunning forest and hilly locations. They offer a fresh outlook for the film but at the same time makes it very difficult to shoot there.

The ordeals of the team can be seen from the video. The film also seems to be physically taxing on Vaishnav Tej who is just doing his second film but he still nailed it as seen in the video. The action sequences are also natural.

Rakul Preet Singh seems apt for Obulamma character in those traditional attires. The making video seems like we are going to be led into an adventurous world with Konda Polam. Come this October 8th, we are in for something different for sure. First Frame Entertainments bankroll the film which has MM Keeravani composing the music.