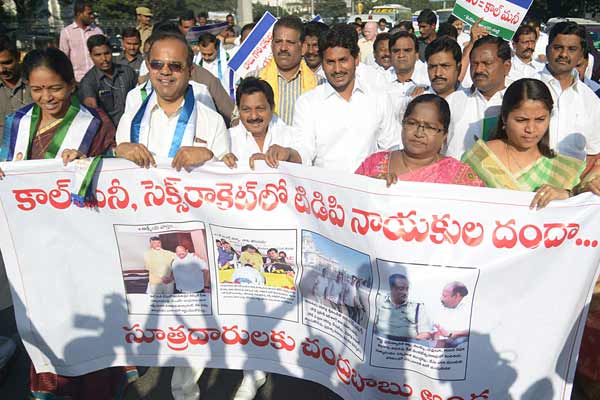 Leader of Opposition in Andhra Pradesh Asssembly YS Jaganmohan Reddy, along with party MLAs staged a sit-in on the road near Mahatma Gandhi statue in Assembly premises protesting against the suspension of entire opposition from House this morning.

Later, they were physically lifted out by the marshals of the Assembly. All the MLAs met at YSRC Legislature Party meeting where a decision to register protest against the suspension had been taken. Jagan himself led the MLAs in the sit-in. Referring to the ruling party’s insistence on a discussion about the 125th birth anniversary of Dr Ambedkar now, the Opposition leader wondered there was no occasion on Thursday that warrants taking up the debate. Jagan said the day was neither birth anniversary nor the death anniversary of Babasaheb. Jagan also displayed papers of the Business Advisory Committee meeting to TV cameras and asked if they could see any reference being made on a discussion about Dr Ambedkar.