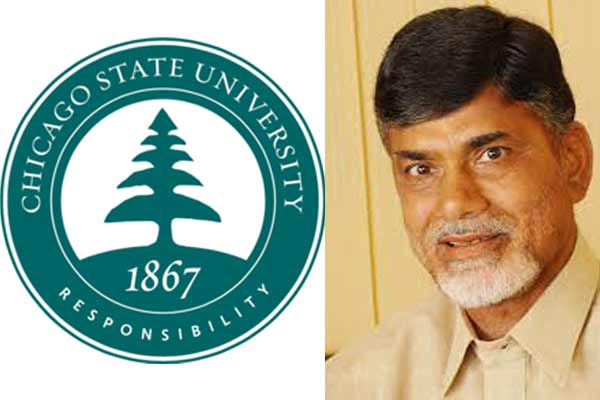 Who influenced Chicago State University (CSU) to select Andhra Pradesh chief minister Chadrababu Naidu for the award of honorary doctorate ? Who helped the CSU discover Naidu as visionary eminently eligible for the award of Doctor of Humane Letters? According to sources vice chancellors of two universities, JNTU-Anantapur and JNTU Kakinada along with some influential members Chicago Telugu Association are said to have helped CSU discover Naidu for the award of honorary doctorate in the whole of India. Chicago State University is a public institution, established in 1867, with an undergraduate enrollment of 3912. The campus size is 161 acres.

There has been academic collaboration between CSU and JNTU-Kakinada since 2012 under prestigious Obama-Singh Education Grant. The Obama-Singh grants are designed to fund institutional partnerships between Indian and U.S. institutions of higher education, through faculty exchanges and research and innovation collaboration in the priority areas. CSU president Wayne Watson, who wrote a letter to chief minister Chandrababu Naidu yesterday requesting him to accept the honorary doctorate, oversaw the signing of MoU between the CSU and JNTU-K. Even a joint degree from CSU and JNTU-K and JNTU-Anantapur is also on the cards. JNTU-A signed MoU with CSU in January this year.

All these people reportedly helped CSU discover Naidu as the man with vision to be honored with Doctor of Humane Letters. But, the timing of CSU letter to the chief minister to accept the award looks inappropriate. Given Naidu’s political predicament now due to many issues, it is certain that doubts are engendered about the genuineness of sentiments expressed in the letter written by CSU president Wayne Watson.

On Friday, in Assembly premises, Telugu Desam party used the letter written by CSU to promote Naidu as the leader of global caliber, Opposition YSR party leader K Roja wondered if the standards of the American university were so low.