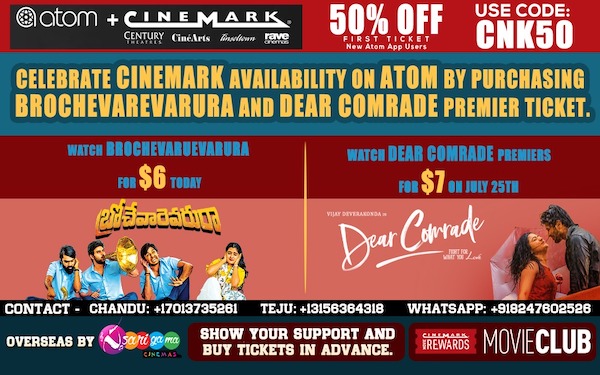 With the new age Telugu Cinema doing good at screens, Brochevaarevarura has turned out to be a hilarious hit. It has been winning the acclaim of both critics and audience since the release on June 27th, 2019. The film has hit $100K across the United States and is going with a rapid pace.

A humorous thriller drama as it is, Director Vivek Athreya has succeeded in narrating a spec narrative with every member of the cast; Sri Vishnu, Nivetha Thomas, Nivetha Pethuraj, Satya Dev, Rahul Ramakrishna and Priyadarshi performing brilliantly.

On celebrating the success of Brochevaarevarura and the anticipation of Dear Comrade which is to be released on 25th July 2019, all the New Atom offers can now avail a flat 50% on the first ticket.

By using the code CNK50, you can get the Brochervaarevarura ticket at $6 and Dear Comrade Premier ticket at $7 only.

Start booking and witness these two unconventional films at your nearest theatres!