Tarak bonds with Abhay Ram on the sets of Bigg Boss 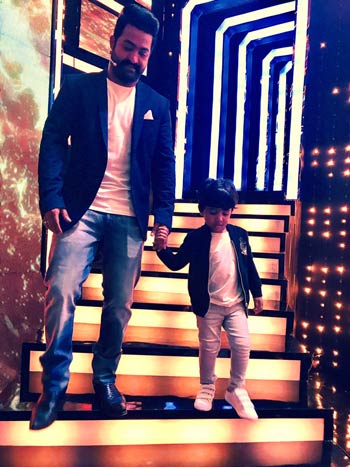 Occupied with lot of work, Tarak has been busy and is staying away from home from the past few weeks. The actor is working even on weekends to wrap up his first ever television show Bigg Boss. The actor’s son Abhay Ram is celebrating his birthday today and he is said to have bonded with his dad today on this occasion. Tarak himself revealed the picture of Abhay Ram on the sets of Bigg Boss where Tarak has been shooting.

Abhay will be spending time with the actor this weekend after which he will return back to Hyderabad. Tarak posted on twitter calling him his happiness. Tarak is even busy with the shoot of Jai Lava Kusa in the direction of Bobby and the shoot is going on in Pune. Tarak is juggling between Pune and Lonavla shooting for Jai Lava Kusa and Bigg Boss. Tarak’s fans have been delighted with the picture and Jai Lava Kusa has been aimed for September 21st release.