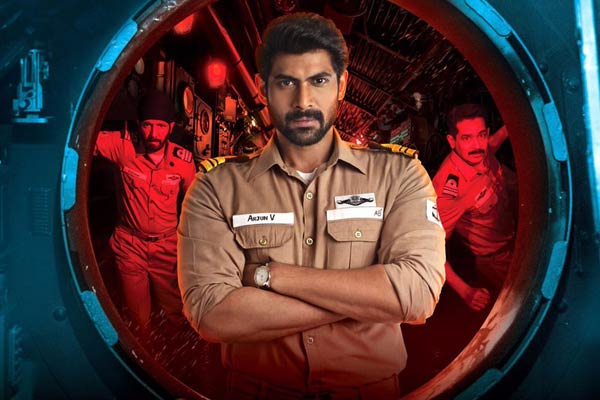 During the Indo-Pak war, in December 1971, Pakistan had deployed its deadly attack submarine PNS GHAZI. While on mission, off the Visakhapatnam naval base, Ghazi sank mysteriously. The Indian Navy claims that Ghazi was hit by our torpedoes after a series of efforts. But Pakistan, as usual denies giving credit to the Indian army, in turn claims that an accidental internal explosion led to the sinking of the submarine. Sankalp , the author of Blue Fish: The War Beneath , has presented his researched version on Ghazi Attack as a movie . He adds his own dose of fiction to this already mysterious war saga. India’s first underwater thriller Ghazi is all set for a grand release today. The film boasts an ensemble cast in the form of Rana Daggubati, Kay Kay Menon, Om Puri, Atul Kulkarni and few other notable artists.

Indian Navy deploys submarine INS S-21 to keep a watch on GHAZI – the most dangerous vessel in the Pakistani fleet. S-21 is led by captain Rann Vijay Singh (Kay Kay Menon), who is assisted by Devraj ( Atul Kulkarni) and officer Arjun Varma ( Rana Daggubati). Capt. Rann Vijay, inspired from the book ‘War as I Knew It’ (written by George S Patton) believes in “Do your duty as you see it, and damn the consequences” theory, but his subordinate Arjun prefers to follow the instructions from the naval headquarters. While the internal ideological conflict between Capt Rann and Arjun establishes,  S-21 is attacked by GHAZI and Capt. Rann Vijay loses his life. Submarine INS S-21 is damaged to certain extent and hits the sea bed, now Arjun (Rana) takes the charge of the submarine.

Rest of the story deals with how Arjun leads his team and the damaged vessel to victory over their counterpart Ghazi.

Capt. Rann Vijay Singh’s characterization wins the galleries with Kay Kay Menon infusing life into this character. However, his overaction at times iritates. Atul Kulkarni as Devraj is T-fit for such roles, Rana Daggubati as Arjun is adequate. Senior actor Om Puri,  Nassar and Milind Gunaji are portrayed in very short roles and hardly showcased their talent. Tapsee Pannu plays an insignificant role as Bangla refugee and doctor by profession. The performances seem less relevant or less noticed, as the movie is focused more on torpedoes and two submarines, their technical details. However, none of the supporting actors looked like they belonged to navy.

Ghazi film starts off with Chiranjeevi’s voice over explaining the number of times in the history, India and Pakistan were indulged in war. Thus, the director sets the mood straight into the main event of the film. However, first half progresses slowly with no high moments, only setting base for the later episodes. In a typical Hollywood template style, most of the movie is conversational except for the core incident (torpedo war). Ghazi team must be appreciated for taking this offbeat path (by Indian movies standard), and not deviating from the subject for commercial purpose. Second half of the movie is better when the Indian naval team fights against all the odds and hits at the Ghazi with a torpedo. Again, the climax is a bit letdown.

The wide-angle visuals of submarine surfacing in the Bay of Bengal, diving under the water are brilliantly shot or VFXed. Cinematography by Madhie is top class and with limited budget he was able to create some technically best shots. Background score by K is an asset – especially for the second half.  Ghazi’s strength is its casting. However, as many of the key artists are from Bollywood, the Telugu dubbing did not suit them. Though this film is a straight film or let us call it as a dual language film, one will get a feeling of watching poorly dubbed film. Dialogues penned by Gunnam Gangaraju did not evoke required emotional connect with the audience. For this genre, delivering meaningful or patriotic dialogues could have been an asset – a chance missed. Perhaps, this movie going experience will be better if watched in Hindi than in Telugu.

To evoke the patriotism, unnecessary insertions of national anthem ‘Jana Gana Mana’ and ‘Saare Jaham Se Achcha’ songs towards the end was done. Director depicted that the Pakistan army gets wilder and attacks directly on our submarine after listening to these patriotic songs. Logic sans in this crucial scene, how can people hear from one submarine to another, as if they are doing face-time ? Rescuing Tapsee and a kid from a merchant ship blast is silly shot. Similarly, the number of missed torpedo strikes showcased, makes you question the reality. Especially the Pakistan captain’s strategy is too cinematic (to make him defeat).

Overall, we can see a decent amount of research has been done, but the degree of authenticity is questionable. Debutante writer, director Sankalp must be appreciated for his effort. Producers Matinee Entertainments and PVP spent lavishly on this movie and by releasing the movie in three languages simultaneously, their daring venture might pay off.

Despite its flaws, Ghazi is one of its kind cinema for us. This film makes Telugu Industry proud, as majority of its crew belongs to Tollywood. Keep your expectations in check and watch out for its different theme. Though at times it appears as a poorly dubbed film, our own Ghazi may impress you with its engaging second half.