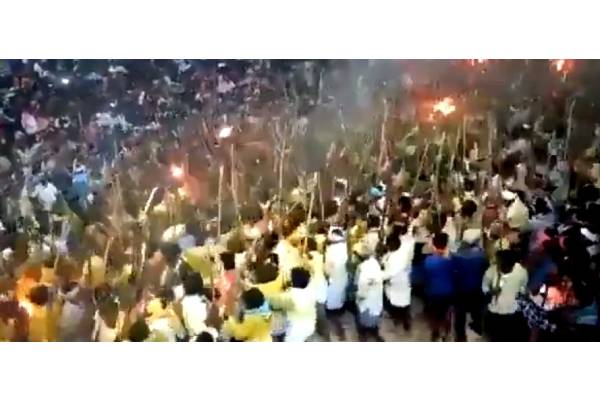 More than 70 people were injured in the traditional fight with sticks during Dussehra celebrations in Andhra Pradesh’s Kurnool district.

Like every year, two groups attacked each other with sticks during Banni Utsav held as part of celebrations at Devaragattu village in Holagonda ‘mandal’ (block) late on Wednesday.

The injured were admitted to hospitals at Adoni and Alur and the condition of some of them is stated to be critical.

The stick-fight is organised every year as part of Dussehra celebrations at Mala Malleswara Swamy temple located on a hillock. Like in the past, the villagers defied the police orders to organise the fight, which they claim to be part of their tradition.

As part of the annual celebrations, people from different villages divide in two groups to fight with sticks to secure the idols of the deity.

This year, the fight was delayed due to rains. The fight led to a huge traffic jam in the area. A boy died on the way to participate in the celebrations. The boy was identified as Ravindranath Reddy, hailing from Karnataka. Police said he was suspected to have died of cardiac arrest.

Every year, people of villages around the temple divide into two groups and fight with sticks to take control of the idols.

Attempts by authorities to dissuade villagers from organising the fight have not yielded results. Every year, the police deploy forces to prevent the fight but the villagers defy the orders and organise the fight.

Villagers believe that Lord Shiva took the form of Bhairava and clobbered two demons, Mani and Mallasura, with sticks. The villagers enact the scene on Vijayadashami day. Group of villagers from the demon’s side try to snatch the idols from the rival group, called god’s team. They fight with sticks to take control of the idols.

Thousands of people from various parts of Kurnool and surrounding districts and neighbouring states like Telangana and Karnataka gather at the village to watch the traditional fight.