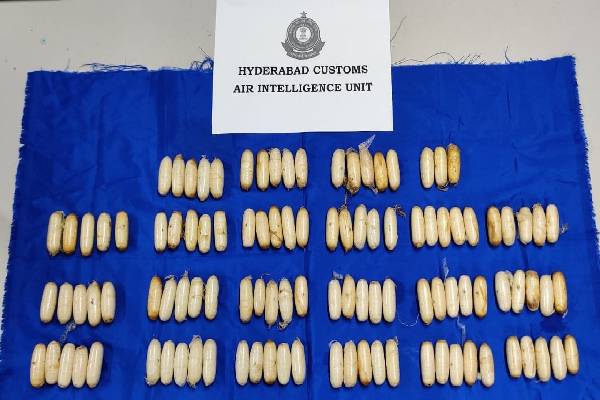 In yet another major drug haul at Hyderabad’s Rajiv Gandhi International Airport, Customs officials seized heroin worth Rs 11.53 crore from a Tanzanian national.

The Customs officials said 1,389 kg of heroin was seized from the male passenger who arrived from Johannesburg via Abu Dhabi on April 26.

The passenger purged 108 capsules containing the contraband heroin over a period of six days.

The passenger was arrested and remanded to judicial custody. Further investigation is on, the officials said.

This is the fourth seizure of heroin at Hyderabad in less than two weeks.

Eight kilogram cocaine worth Rs 80 crore was seized from two passengers by the Directorate of Revenue Intelligence (DRI) late on May 1.

The contraband was seized in two separate cases. A male Tanzanian national, travelling from Cape Town to Hyderabad on a business visa and a lady passenger from Angola, with itinerary Angola – Mozambique – Lusaka – Dubai – Hyderabad on a tourist visa were arrested.

A total of eight kg of cocaine, each passenger carrying 4 kg, were seized from the passengers from the packets concealed in the false bottom of their trolley bags.

Earlier, the Hyderabad Customs along with DRI had seized 1,157 grams of cocaine worth Rs 11.57 crore from a Tanzanian national. The passenger had arrived at Hyderabad Airport from Johannesburg via Dubai on April 21.

A total of 79 ingested capsules were recovered over a period of 5 days.

According to DRI, the instances of smuggling drugs through air have increased with easing restrictions on air travel and increased passenger traffic.

While Indian Customs have facilitated the clearances smoothly, the alert officers have busted the drug smuggling syndicates and nabbed carriers on multiple occasions across the country.

Ingenious ways of transporting the contraband have been noticed by way of laminating drugs finely into their baggage which are almost invisible to the naked eye or by concealment in shampoos and food items or at times the passenger becomes body carrier by ingesting drugs in laminated capsules.

Sustained efforts of DRI has led to seizure of more than 350 kg of cocaine, estimated to be worth Rs 3,500 crore in illicit market, across the country after January, 2021. This includes a big haul of about 303 kg of cocaine, seized from a containerised cargo at Tuticorin Port.