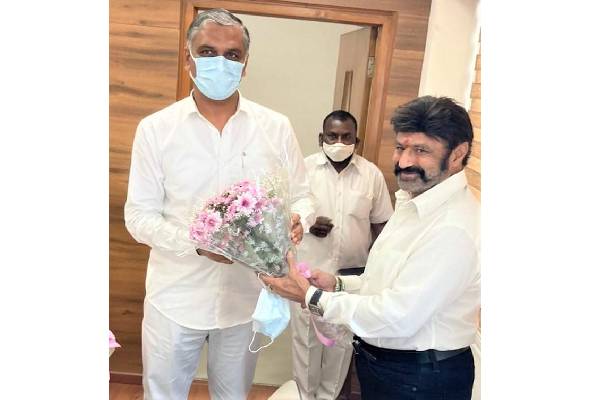 However, TRS sources clarified that the meeting has nothing to do with politics and Balakrishna met Harish Rao in his capacity as chairman of Basavatarakam Indo American Cancer Hospital and Research Institute located in Jubilee Hills.

During the meeting Balakrishna has explained various services provided by the hosptial and its activities. Further he also brought several issues concerning to development of hospital to the notice of Harish Rao and urged him to extend necessary support from the Telangana government. Harish Rao reportedly has responded positively to the representations made by Balakrishna and assured that he will take this to the notice of Chief Minister K.Chandrashekar Rao.

Sources said Balakrishna sought few tax concessions from Telangana government for the development of cancer hospital on the ground that the hospital was offering quality medical services for poor and needy for either free or for nominal rates.

Balakrishna had earlier met KCR in January 2016 on the same issues. KCR had promised to extend all the benefits which Balakrishna had sought then. But few reportedly are still pending.

For this reason, Balakrishna met Harish Rao and reminded him about the KCR’s promises made earlier.