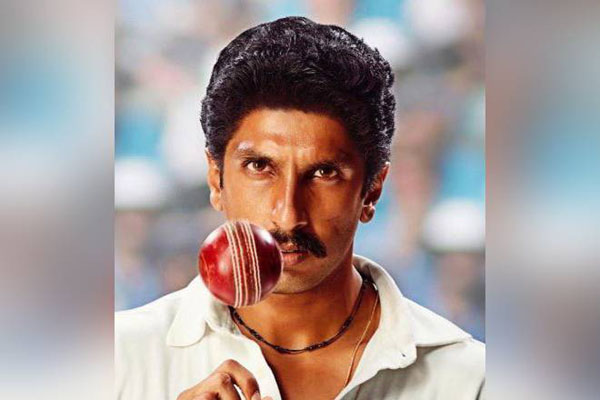 Cricket seems to be returning in the mindspace of Bollywood filmmakers, with a few high-profile projects lined up for release next year.

In 2020, Ranveer Singh plays Kapil Dev in “’83”, Kabir Khan’s film about India’s historic victory at the cricket World Cup of 1983. Shahid Kapoor, after “Kabir Singh”, seems to have struck gold with remakes of Telugu hits. His next, “Jersey” is a Bollywood remake of Gowtham Tinnanuri’s Telugu film of the same name, and it narrates the story of a failed cricketer who decides to revive his career against all odds despite being in his late thirties. Then there is the Mithali Raj biopic, which stars Taapsee Pannu as the protagonist. A film titled “God Of Cricket” has also been announced on cricketing legend Sachin Tendulkar’s birthday this year.

Sure, Bollywood has always been fascinated by cricket, which remains a religion in India. In the past, we have had “Lagaan”, “Iqbal”, “Patiala House”, “Dil Bole Hadippa”, “Jannat”, “Chain Kulii Ki Main Kulii”, “M.S. Dhoni: The Untold Story”, “Azhar” and “The Zoya Factor” among others. In the nineties, too, there was the odd attempt to cash in on the sport with Aamir Khan starring as a cricketing star in Dev Anand’s “Awwal Number”.

Still earlier, in the eighties, real-life cricketer Sandeep Patil (incidentally, among the heroes of the 1983 team that won World Cup) starred as a reel-life cricketer in a film called “Kabhi Ajnabi The” (1985) . Also, Kumar Gaurav — a teenybopper star of the era– played a cricketer in “All Rounder” (1984).

There is a difference between the upcoming stock of cricket movies and the older ones. In most cases, Bollywood films of the past that had cricket as a backdrop were only using the sport to unfold a formulaic story of romance, drama, melodrama, comedy and, at times, some action. Barring the odd “Iqbal” or biopics of Dhoni and Azhar, these films were not so much about cricket or cricketers.

That’s something that excites the audience these days. A quick scan of the welcome that the Mithali Raj biopic is seeing on social media ever since it was announced a while back tells you as much.

“Can’t wait already”, “your biopic will be a must watch”, “another cricket biopic, already excited for it” — are some of the comments left on Twitter earlier this month after Viacom18 Studio announced that actress Taapsee Pannu will be bringing the story of Mithali alive on the silver screen with a biopic titled “Shabaash Mithu”.

“It’s not just a biopic of a personality but a larger story on how Indian women cricket team rose to great heights and their battles against the odds. It’s also about the biases in our society, about the rising Indian women and their struggle,” Ajit Andhare, COO, Viacom18 Studios, told IANS.

Andhare was watching the multiple-Oscar nominated film of 2016, “Hidden Figures”, when the idea of his film dawned in his mind. ” ‘Hidden Figures’ tells the true story of African American women who helped the US win the space race. On reflection, it struck me that just like the African women’s exploits are not widely known, so are our women cricketers! And that when cricket is a religion in India. So I developed a story idea around this core and went about securing the life rights of Mithali Raj who both as captain and a feisty woman epitomises this irony,” he said.

“We then went about developing the screenplay and finally got it right after changing many a writers. After several iterations between me and our in-house team member we developed the final screenplay. Taapsee Pannu was the first choice for the role and it’s great that we got her nod immediately after the narration to her. Rahul Dholakia loved the script, shares this dream and is on board as director,” added Andhare.

Filmmaker Kabir Khan’s “’83”, on the other hand, will take the audience back to the time when Kapil Dev led the underdog Indian cricket team to a famous victory against the mighty West Indies in the final of the 1983 World Cup. “’83”, which features Ranveer Singh, Tahir Raj Bhasin and Ammy Virk, among others, is co-produced by Reliance Entertainment, Phantom Films and Nadiadwala Grandson Entertainment.

“’83’ is not just a film about cricket, it is about the human spirit and hope. Whether you are a cricket fan or not, the story will resonate with you. It is about men who won against all odds — a David versus Goliath story that will give everyone goosebumps,” Shibasish Sarkar, Group CEO, Reliance Entertainment, told IANS.

If sources are to be believed, filmmaker Rajkumar Hirani has been approached with two films based on cricket. The first, a Fox Star film, aims at being a larger-than-life Lala Amarnath biopic that has been written by Piyush Gupta and Neeraj Singh. The second is a cricket story being written by Abhijat Joshi.

“Cricket is not just a game. In India, it’s a religion that unites people. The biting of the nails, the racing of the hearts – all of these are familiar to Indians who are the most passionate fans in the world of Cricket. We aim at telling stories that resonate with the masses,” said Sarkar.

Trade expert Vinod Mirani feels that Hindi filmmakers are making movies around cricket or sports in general as India is on a winning spree. “You can’t be telling stories of losers and expect them to run (at the box office),” he told IANS.

Actors are also enjoying telling stories of sports personalities. Angad Bedi, who played cricketer in this year’s film “The Zoya Factor” and the web series “Inside Edge 2”, shared: “I like to play a sportsperson. Their lives are extremely close to the lives that we (actors) lead. They are full of ups and downs. One day you are a hero, the next day, media and people put you down if you are not giving your best.”

So far he has played fictional characters, he wouldn’t mind featuring in a biopic. “I would love to do a biopic on a bowler like Zaheer Khan or Harbhajan Singh. I would love to see their struggles on screen,” said Angad.