Sai Dharam Tej is shooting for Solo Brathuke So Better that is in the final stages of shoot. He signed a political drama in the direction of Deva Katta and the film got its official launch today. Powerstar Pawan Kalyan attended the pooja ceremony as Special Guest and launched the film with a clap. Allu Aravind handed over the script and wished the team good luck. Nivetha Pethuraj is the leading lady and Manisharma is composing the music.

The regular shoot of this untitled film starts once Sai Dharam Tej wraps up his shoot for Solo Brathuke So Better. Bhagavan and Pulla Rao will jointly produce this film which will release during the second half of this year. Deva Katta who is struggling for success gets a golden opportunity and he is in plans to bounce back with this project. 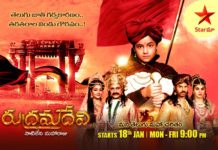