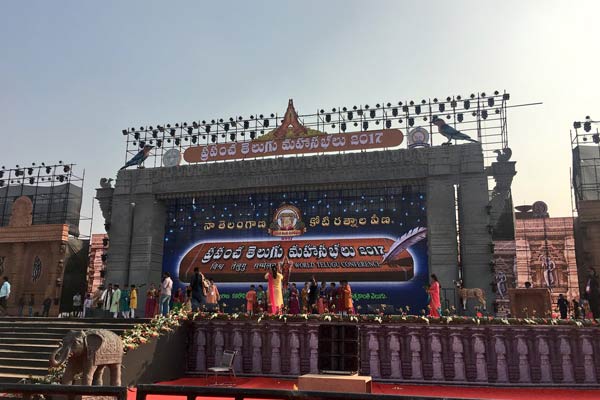 The World Telugu Conference (WTC) began on a colourful note here on Friday as Telugus from across the world gathered to discuss preservation and promotion of the language.

The inaugural also saw classical dance by 30 artistes, highlighting the rich Telugu culture. There was also a laser show and fireworks to mark the beginning of mega literary and cultural event.

More than 8,000 delegates from both the Telugu-speaking states, other parts of India and 42 other countries are attending the WTC being organized by the Telangana government. The participants include well-known Telugu poets, writers, literary figures and artistes.

This is the first World Telugu Conference after Telangana State was formed in 2014.

In his inaugural address, Venkaiah Naidu spoke about the greatness of Telugu language. He said after his mother, the mother tongue had given him the maximum happiness.

He said that one who forgets his mother, his mother tongue and place of birth is not a human being.

Underlining the need to respect teachers, he remarked that Google can never replace a teacher. Chandrasekhar Rao felicitated his teacher on the occasion.

Police had made elaborate security arrangements with the deployment of 3,000 personnel in and around the stadium. 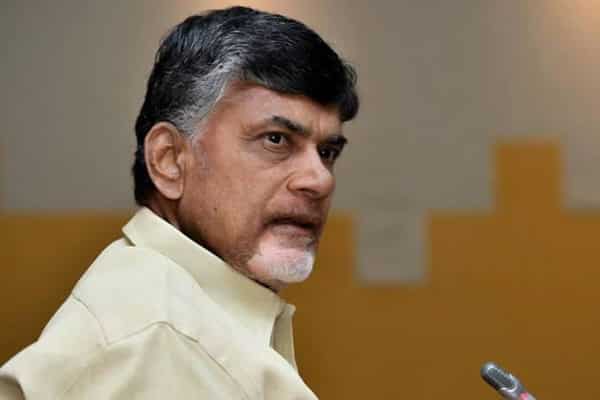 If language is a unifying force, the World Telugu Conference opening in Hyderabad on December 15 seems to be driving a wedge between the two Telugu states. People in Andhra Pradesh and those from that region who have settled down in Hyderabad feel outcasts as the preparations for the five-day meet are in full swing.

Reasons are many. First and foremost is AP Chief Minister Nara Chandrababu Naidu and his whole team is said to have not been invited to the conference. This is seen as a deliberate snub to the former CM of undivided Andhra Pradesh who was also not invited for the recent Metro opening.

Since the conference is being organised by the TRS Government and its other organs to promote the Telugu language and literature and its culture at various forums, how could they ignore another Telugu state which was a part of the Telugu region until recently? That’s the question bothering ordinary people. It’s both amusing and confusing.

Amusing because, Hyderabad, for all practical purposes, is still the cultural capital of both states. Almost all major Telugu cultural events are held in the city. Above all, the Telugu film industry and print and digital media are all based in Hyderabad. Despite these ground realities, keeping AP out of picture is beyond one’s ken.

A look at the 52-page booklet listing various events at seven venues shows that the organizers have made sure to include one Telangana cabinet minister in every session, literary or otherwise. While Vice President M Venkaiah Naidu will inaugurate the conference, President Ramnath Kovind will be the chief guest at the concluding ceremony on December 19, both at LB Stadium.

Dissenting voices could be heard about the way the conference is being organised, including the way delegates and speakers have been chosen. But the only leader who has lashed out at the government is BJP MP Bandaru Dattatreya. He said the KCR government is using the World Telugu Conference for its publicity and to derive political mileage. He alleged that the institutions that had played stellar role when there were curbs on Telugu use (Nizam rule) and Telugu legends have been ignored.

However, Nizamabad MP and the Chief Minister’s daughter K Kavitha has a different take. In an interview with TOI, she said the aim of the global Telugu conclave is “to bring to fore the pivotal role of Telangana in shaping the language.” She claimed that all the 20 forms of Telugu language had come into being on Telangana soil.

It is obvious that the TRS government’s aim in convening the conference is to let the world know Telangana’s contribution to the language by hundreds of writers, poets and intellectuals whose works had not been promoted or recognised by the earlier (Andhra) governments.

No doubt, the region’s contribution to enriching the language is enormous. In fact, before the geographical boundaries were delineated, there was no divide among Telugu scholars except during erudite discourses. It is also an acknowledged fact that Telangana was instrumental in getting the classical language tag to Telugu when Tamil Nadu claimed it for Tamil.

But credit should be given where it is due. Denying it carries the risk of degenerating into language chauvinism. 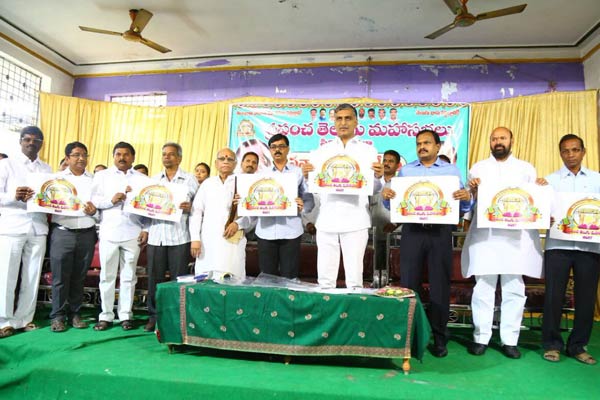 For the first time, the Telangana Government is hosting the World Telugu Conference in Hyderabad from December 15 to 19. Ironically, it was the venue for the first meet of Telugus from across the world in 1975 when the city was the capital of united Andhra Pradesh.

For reasons unknown, the global conclave of Telugus has not been held regularly. Though the inaugural was a grand affair and launched with lofty aims by the then Government of Andhra Pradesh, the second and third conferences were organised in Kuala Lumpur, Malaysia, in 1981 and Mauritius in 1990 respectively. The last one was held in 2012 in Tirupathi. That means in over 40 years, the global Telugu conclaves had been held just four times, averaging one per decade. And, all these were held under the patronage and support of the united AP Government.

The idea behind launching a platform for Telugus living in the country and outside of it is to bring together the Telugu Diaspora and make them aware of the greatness of the Telugu language and its literature, art and culture, history, etc. While the success of the 1975 conference was unprecedented – a lakh of people were said to have attended various events every day – its appeal has started waning subsequently. One reason was the enthusiasm with which the then state government had worked for it and organizations and prominent individuals supported it is mostly absent in later years. The World Telugu Conference was such a draw that who was who in every field of human activity participated and duly honoured for their contribution to the language and literature and various forms of arts and culture, including cinema and stage drama.

Fast forward to 2017 World Telugu Conference. The KCR government is doing everything possible to make it a grand success. But there is a difference. While the core aim of the previous meetings was to promote the Telugu language and culture and everything linked to or associated with them as stated at the 1975 inaugural session, the forthcoming one appears to project Telangana and its Telugu, literature, culture, traditions, and even its cuisine.

Chief Minister K Chandrasekhar Rao has directed a cabinet sub-committee specially constituted for making arrangements for the conference to serve Telangana specialities, including, of course, Hyderabad biryani to the delegates, invitees and others attending different sessions and events at eight venues spread across the city. The food will be supplied from a centralised kitchen managed by top chefs.
Similarly, various cultural events listed in the conference itinerary are designed to showcase Telangana’s arts and crafts, festivities, rural traditions, poetry and folk songs. According to KCR himself, the conference should be a mirror for the world to see everything about Telangana.

There is nothing wrong in his thinking because he feels whatever is dear to Telangana people has been suppressed by ‘Andhra rulers’ during their 60 years of rule. In other words, it’s Andhra language and cultural imperialism that have muted Telangana’s distinctive aspects of life. Many share the view and see the World Telugu Conference as an opportunity to remind others of the ‘forgotten’ greatness of this region and its contribution in enriching Telugu. A Rs 3-crore 40-minute documentary film encapsulating all about the youngest state and featuring the heartthrobs of Tollywood is being readied for the global audience.

The Telangana Sahitya Academy has invited about 40 delegates from other countries and 50 from other states. Around 8,000 Telugu luminaries from all walks of life are expected to attend the conference.
While all these efforts are welcome, many are raising questions about the very purpose of the conference: Is it to unite the Telugu Diaspora and promote the Telugu language, or is it to promote the Telangana State and Brand Hyderabad? 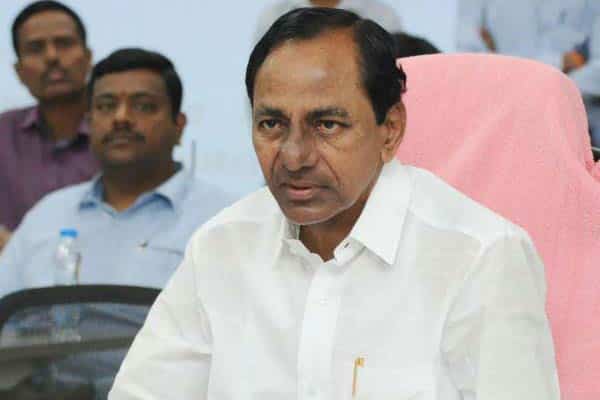 The First World Telugu Conference will be held here in October instead of June as decided earlier, the Telangana Government announced on Wednesday.

It was earlier decided that the inaugural ceremony would be held on June 2, the state’s Formation day.

But as the date falls under ‘Ashtami’ and weather may not be conducive, the state government’s Advisor for Cultural Affairs K. V Ramanachary and other literary personalities requested the CM for the change of dates, said a statement from the CMO.

They said they require some time to invite delegates from India and abroad and to organise the conference on a large scale.

World Telugu Conference to be held in Hyderabad next month 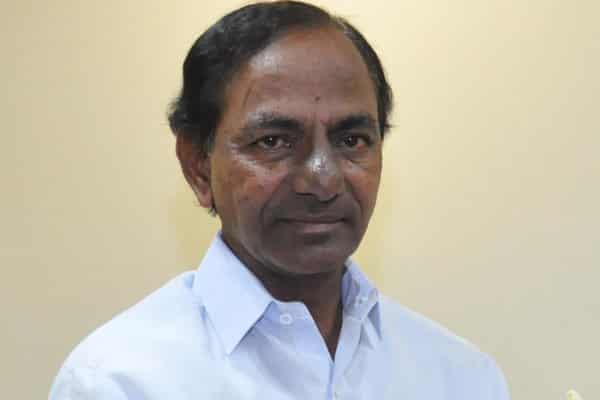 The conference will coincidence with Telangana’s formation day celebrations.

The proposed conference and celebrations would be done under the supervision of the newly-formed Telangana Sahitya Academy, said a statement from the Chief Minister’s office.

He said that best Telugu dialect and best poetry is available in Telangana and the academies should become platforms to spread the literary flavour of Telangana to the world.

The CM held a review meeting on the organisation of the World Telugu Conference.

He asked officials to conduct the proposed World Telugu Conference and its programmes in such a manner that they should be heard and talked about world over and become a milestone in the history.

He wanted well known and prominent literary personalities, followers of the Telugu language living within the country and abroad to be invited for the conference.

As part of the conference, poets’ gatherings (Kavi Sammelanas)and conferences on various genres of literature will be organised.