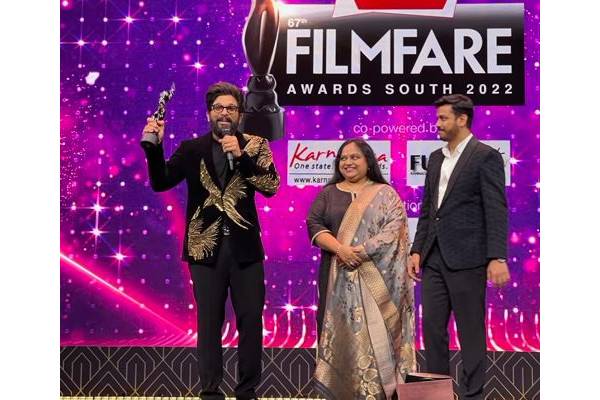 It is a clean sweep for Allu Arjun’s Pushpa: The Rise at the 67th Parle Filmfare Awards for South 2022. Allu Arjun bagged the Best Actor Award and Sukumar is named as the Best Director. The film also bagged awards in the categories of Best Music Director, Best Cinematography, Best male and female singers, Best Film and others. Allu Arjun thanked the fans, audience and Filmfare for the honor. Sai Pallavi is named as the Best Actress for her performance in Love Story and she also bagged the Critics Best Actress award for her performance in Shyam Singha Roy. Natural Star Nani is the Best Actor (Critics) for his performance in Shyam Singha Roy. Legendary lyricist Sirivennela Seetharama Sastry bagged the Best Lyrics award for the song Life of Ram from Jaanu.

Mega Producer Allu Aravind is felicitated with Lifetime Achievement Award. Vaisshnav Tej and Krithi Shetty are awarded with Best Debut Male and Best Debut Female awards. Suriya is the Best Tamil actor for his outstanding performance in Soorarai Pottru and Lijomol Jose bagged the Best Actress Award from Filmfare. Soorarai Pottru swept most of the Filmfare Awards for Tamil.