Hyderabad: IAS officers in the Andhra Pradesh government are brainstorming over the role of chief secretary LV Subramanyam after the sharp criticism emerged from the chief minister Nara Chandrababu Naidu. The IAS officials will elect a new president of their association.

The IAS officials discussed on the role of chief secretary LV Subramanyam after the remarks made by the Chandrababu Naidu.

Naidu has criticised the unilateral decision of Election Commission (EC) for appointing LV Subramanyam as cheif secretary without consulting anyone. “Along with YS Jaganmohan Reddy, Subramanyam was also co-accused in disproportionate assets case. The CS was a co-accused and it’s on record. I question how can EC appoint Subramanyam as CS. I am not against anyone, but EC should act in a democratic way. I question the role being played by retired officials. Where were they when chief secretary Anil Chandra Punetha was transferred,” maintained Naidu.

It may be recalled that the Election Commission on April 5 removed AP Chief Secretary Anil Chandra Punetha from the post and appointed senior-most IAS officer LV Subrahmanyam of the 1983 batch in his place.

Earlier, the EC had removed two top bureaucrats from their posts during election time. However, Punetha challenged EC’s Order transferring the Director General of Intelligence AB Venkateswara Rao. Punetha on March 27 filed a writ petition in the AP High Court.

Naidu further contended that the EC did not have any power to interfere with the course of administration that is unconnected to polling. 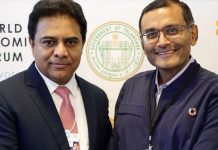