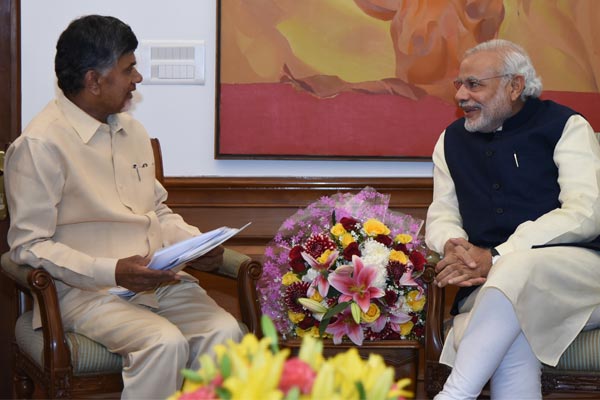 Chief minister Chandrababu Naidu everyday cries that state was divided against the wishes of the people. Three days ago Naidu lamented before a central IAS officer Sanjay Kothari that  the state was given a raw deal by the NDA government.

AP has no capital city. All major institutes are lost to Telangana as they are located at Hyderabad. State lost revenue to the tune of Rs 16,000 crore. Still the Andhra Pradesh has never been put high on the agenda of PMO. There have been no special reviews in the PMO to oversee the implementation projects, to see if the state is recovering from the shocks of bifurcation as per the AP Reorganization Act, 2014.

Andhra Pradesh is ruled by Telugu Desam party led by most experienced chief minister in India, Chandrababu Naidu, a trusted ally of BJP. Still AP has ignored, was the opinion of CM Naidu. This conveyed to the central joint secretary rank officer in DoPT.

It is not being treated even on a par with Bundelkhand, a region of UP. Let’s have a look at the importance Prime Minister Modi attaches to the development of this region.

1. PMO, for the first time since Narendra Modi assumed office, conducted high-level review of drought situation in Budelkhand on April 9, 2016.
2. UP chief secretary made a presentation on the situation.

3. A high-level committee chaired by union home minister recommended release of Rs 1304 crore as drought relief to UP.

4. Comprehensive Contingency Drinking Water plan is ready for the region.

8. A bonus of Rs 20 for Bundelkhand region over and above the MSP for Kharif will considered.

Can Andhras expect this type of treatment from PMO to their truncated state?