SS Rajamouli’s magnum opus Baahubali: The Conclusion which shattered the Indian box-office dominated the television TRPs too. The movie has been screened across Hindi, Telugu and Tamil on October 8th. The movie crossed the TRPs of many Bollywood movies by a huge margin and emerged as the most watched Hindi premiere on small screen. The film received 26054 impressions while Salman Khan’s Tubelight which has been premiered in the same week got 5195 impressions. 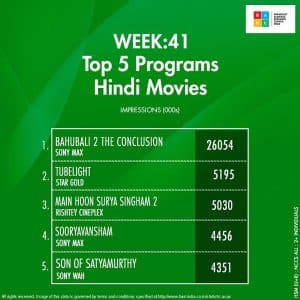 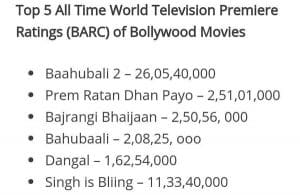 Yet another landmark for Baahubali. A new record as the most viewed Hindi film premier ever on small screen. Jai Maahishmathi. #Baahubali2✊ https://t.co/GDWTkU2HEy