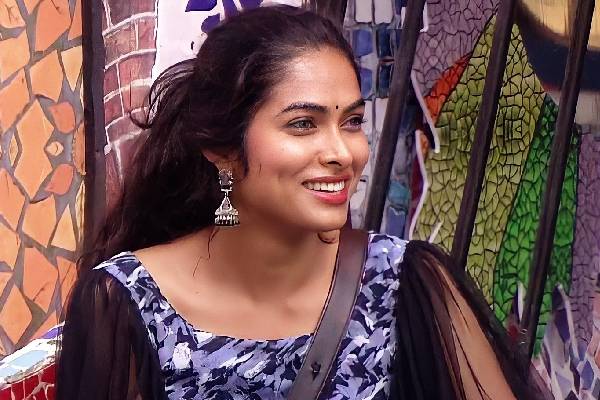 After her 50 days of the journey in the house, finally, Divi evicted from the house in the episode hosted by Samantha.

Monal, Divi, Ariyana, Noel, Abhijit, and Avinash are in the nominations this week. This week, during the nominations, Bigg boss divided the housemates into pairs and asked them to decide between them who will be saved and who will be in nominations. Divi was paired with Lasya. Lasya asked her to give a break from nominations as she has been in the nominations continuously. Divi agreed to that and that proved disastrous for her. After all other contestants got saved, Samantha announced her eviction and asked her to pack the bags. Amma Rajasekhar got shocked by this and was seen crying. Divi told that he was really like her ‘Amma’ in the house.

After coming out, she looked composed and told that her career has just started. In fact, on the first week itself, she was at the bottom of the list till mid weak but one episode, in which she analyzed the housemates brought her applause and saved her from eviction. Since then she was getting good votings. But one episode in which she nominated Lasya by saying ‘Dal prepared by her was not good’ brought a lot of trolls on her. It seems all is not well between Lasya and Divi. Even during the big bomb task also she selected Lasya for the task of preparing food for the entire house next week.

Most of the social media handles predicted Monal to leave this week too, but Bigg boss makers seem to be showing personal bias towards Monal for some reason. It is known news that Bigg boss show is receiving a lot of negative feedback in recent times for saving Monal, who has been the most irritating contestant of the season, at the cost of other housemates who are sincerely playing the game. In fact, many people opine that Bigg boss intentionally made Akhil and Monal a pair during nominations so that only one of them will be in the nominations which will help the nominated contestant get more votes as the fans of these two will vote for a single person. But despite that, the inside information is that Monal is the one who got the least voting this week too.