Switch to: తెలుగు
Home Politics BJP, Congress claim they alone can take on TRS in Telangana 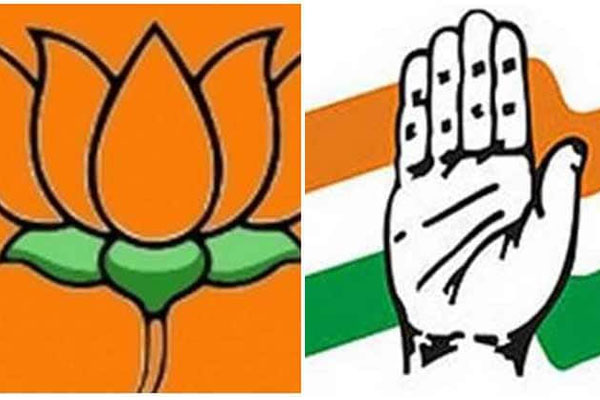 Buoyed by their impressive gains in the Lok Sabha polls in Telangana, both the BJP and Congress claimed on Friday that they alone can take on the ruling Telangana Rashtra Samithi (TRS) and emerge as its alternative.

A day after making surprising gains by winning four seats, the BJP celebrated its victory while Congress cadres rejoiced in three constituencies.

In 2014 election, the BJP and Congress had bagged one and two seats, respectively, and this time their prospects looked bleak with the TRS, fresh from its resounding victory in the Assembly election six months ago, aimed for a clean sweep.

TRS’s tally, however, came down from 11 to nine while its ally All India Majlis-e-Ittehadul Muslimeen (AIMIM) retained its lone seat.

At the celebrations at the BJP office on Friday, party General Secretary Muralidhar Rao said BJP alone was capable of countering anti-democratic policies of TRS. He said the party alone could fight TRS’ fascist policies and family politics.

He said his party’s victory in four constituencies had given new hope to the party workers. Former Union minister and senior BJP leader Bandaru Dattatreya termed this as a great victory and said it had made BJP a second major political force in the state.

However, state Congress chief Uttam Kumar Reddy said the Congress alone can be an alternative to TRS. He claimed that only Congress has the strength to oust TRS from power.

Reddy, who was elected to the Lok Sabha from Nalgonda constituency, said though BJP was not strong enough in the state, it luckily won four seats. He pointed out that BJP had forfeited its deposit in 100 out of 119 Assembly seats in the election held in December.

BJP had won just one Assembly seat while the Congress had emerged as the second largest party with Assembly 19 seats.

Referring to the defection of 11 Congress MLAs to TRS during the last couple of months, Reddy said the poll results proved that the resignations and defections would have no impact on the party.

Congress leader Revanth Reddy, who was elected from Malkajgiri Lok Sabha seat, said Chief Minister K. Chandrashekhar Rao was treating Telangana as his fiefdom and hence the people taught him and his party a lesson.

Revanth Reddy, a bitter critic of the TRS chief, said the people gave this mandate due to the arrogance of Chandrashekhar Rao and his son K. T. Rama Rao.