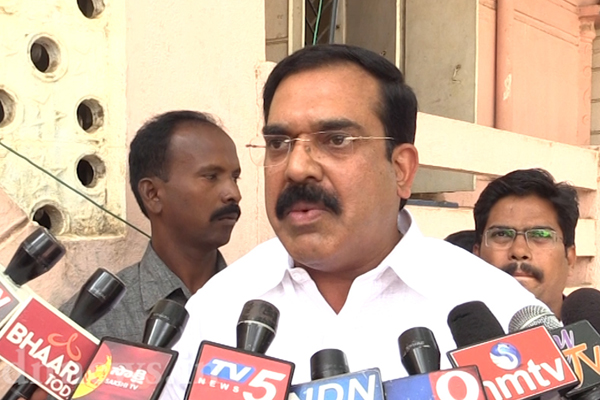 Here is a bombshell on all those who would aspire to pool up their hard earned money and get ready to spend Rs. 10 cr to Rs. 20 cr in the next MLA elections in Andhra Pradesh. Because, one such ticket aspirant and a long-time YCP leader had a bitter experience and his hopes were now dashed. It is none other than Nellore Zilla Parishad Chairman Bommireddy Raghavendra Reddy, who has long been working in Venkatagiri assembly constituency in the hope of contesting next elections on YCP ticket. He got high hopes of becoming an MLA this time and began taking up service activities quite early. Suddenly, Jaganmohan Reddy appointed another leader as in-charge of Venkatagiri party unit. It was an indication enough for Bommireddy that he would not be getting MLA ticket anymore. But the aspiring leader met Jagan and argued his case in full force, saying that he had all along worked with commitment for the strengthening of the party in the district in his capacity as Zilla Parishad Chairman.

Bommireddy was stunned and left speechless at Jagan’s reaction. “Can you spend Rs. 50 crore? The Anam family can do so and get elected from there,” Jagan was stated to have told Bommireddy in a rather casual tone. With no alternative in sight, Bommireddy rushed back home to Nellore in disappointment and discussed the matter with his well-wishers and followers.

After careful thinking, he called a press conference and announced his resignation from the YCP on Saturday, saying that Jaganmohan Reddy had insulted and embarrassed him for the sake of giving Venkatagiri ticket to former minister Anam Ramanarayana Reddy.

Political observers say that Bommireddy had also got ready to spend up to Rs. 10 crore to Rs. 15 crore. He had come from a real estate background with their activities mostly in Chennai and Bangalore.

The incident sent shock waves among other aspirants and even some sitting MLAs. It is now clear that whoever comes forward with proof of spending around Rs. 50 crore and more, the party will give tickets to them with no questions asked. YCP leadership is also creating a scare among ticket aspirants by saying that the TDP is going to spend huge amounts this time in every assembly constituency. The spendings may be in the range of Rs. 50 crore to Rs. 70 crore depending on the circumstances there. No surprise that some assembly constituencies will match the MP seats in terms of making the contestants to spend big money. For the opposition parties, the 2017 Nandyal byelection remains a stark reminder of how money power changed equations and impacted poll outcome. The TDP won over YCP with a majority of 27,466 votes while Congress did not get deposit and failed to cross 100 votes.

Congress AP President N. Raghuveera Reddy even demanded cancellation of Nandyal bypoll on the plea that TDP and YCP had spent Rs. 200 cr. There were rumours at that time a family having four to five votes had got benefits up to Rs. 1 lakh and even more. Some families took money from both parties and voted accordingly to both contestants.

Money alone may not win but it certainly is going to play key role in 2019 elections. More so, in AP.