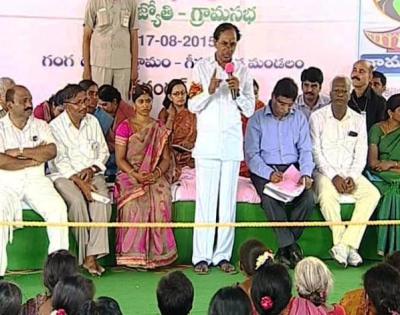 In an unprecedented gesture, chief minister Chandrasekhar Rao announced Rs 10 crore grant to Gangadevipalli to further develop the village. While launching the Grama Jyothi program today, formulated for the all-round development of villages in Telangana at a cost of Rs 25,000 crore, chief minister Rao said, he was ready to give whatever the villagers want. ” You ask for anything, I will give and it is your responsibility to show the physical progress,” he said this morning to the villagers.

The secrete of the success of the village,located 25 km from historic fort city Warangal, is that the village has not allowed political parties prey upon the villagers for votes and commission based developmental works. Though villagers are free to vote for the parties they like, everybody is to adhere to the village code as far as the development is concerned.

This small village, known for its democratically functioning Panchayat, achieved many things with the collective effort of the villagers. The villages has power supply to every home. Clean and green streets, well-lit street lights and civic sense are the hallmarks of the village, which is run like a government with 24 committee to look after subjects like health, education, electricity, loan recovery, plastic prohibition, farmers, alcohol prohibition committee etc. The village has banished liquor age ago. CM’s cheap liquor may not be welcome in the village.

The village practices participatory democracy, with every family having one responsibility are the other with regard to the maintenance of the facilities in the village.The village has an RO water purification plant and is maintained by the village itself. The village with a population of 1500 boasts 100 per cent literacy. Usage of plastic bags is banned by the village and villagers honor this.

The villagers achieved a rare unity among themselves and attempts to resolve the problems collectively. Before 1993 Gangadevipalli was like any other Telangana village, with severe drinking water problem. The villagers overcame it by building two overhead tank with their own contribution, even though none of the family falls in rich category. All houses have taps. there are no public taps in the village. Families, who need more water, need to pay Rs 50. The rate is fixed with consensus. The village was awarded Nirmal Gram Puraskar in May 2007 and the then president Kalam gave away the award to the Sarpanch. The village was adjudged Best Panchyat in 1997-98, 2003-04, 2007-08,2009-10. Later again, In 2008 it received state-level cleanliness award. In 2010, the village won Rs 5 lakh as Google Panchayati Award. In 2007 Andhra Bank declared the village as ‘Model Village’.