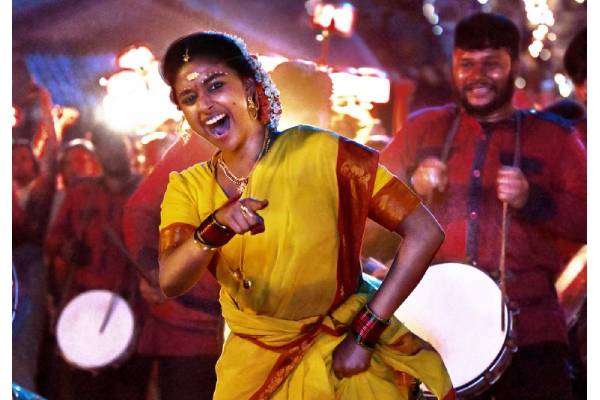 Natural Star Nani’s next film is titled Dasara and it is slated for summer 2023 release. Nani plays a de-glam role in this Telangana-based intense love story. Keerthy Suresh is the leading lady and the makers kept her look under wraps. Marking her birthday, the makers unveiled the first look poster. Keerthy Suresh essays the role of Vennala in the film and the actress too will be seen in a de-glam role. She is seen in a dancing mood and is dressed in a saree in a bridal look.

The shoot of Dasara is taking place in Hyderabad and a massive set is constructed for the film. Sukumar’s protege Srikanth Odela is the director. Santosh Narayanan composes the music. Dasara is the costliest film made in Nani’s career and all the theatrical, non-theatrical deals are closed. SLV Cinemas are the producers of Dasara. The first single kept trending all over for days. The shooting portions of Dasara are expected to be completed by the end of this year.