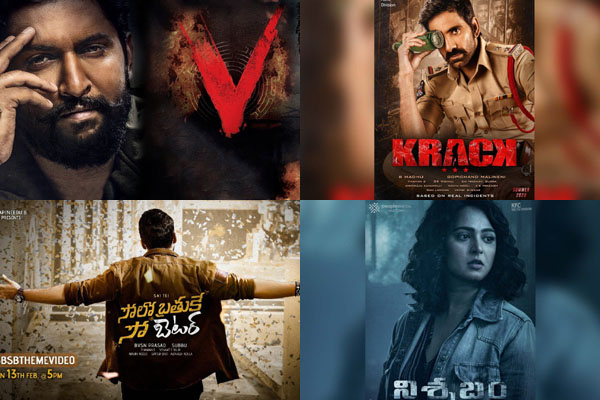 Telugu360 was the first to disclose that Nani’s next film V is heading for a digital release very soon. Tollywood actors were quite hesitant for a digital release as they are scared that they would lose their theatrical market. Top producer Dil Raju was the first to convince Nani explaining about the current situations and the heaping up budgets. Nani’s V will release on September 5th on Amazon Prime and an official announcement would be made at the earliest. The deal is closed for Rs 33 crores.

The latest news we hear is that a bunch of films are now following V and are heading for a digital release. Sai Tej’s Solo Brathuke So Better will release on Zee5 and the deal got closed recently. The makers pocketed Rs 25 crores for the digital rights. The pending shoot of the film will be completed by September. Ravi Teja’s film Krack too has to complete some portions of shoot and will be wrapped up soon. The deal will be closed in a week and Zee5 is the frontrunner to acquire the digital rights of Krack. The film too may release in October.

Anushka’s Nishabdham is in the final stages of post-production and the VFX work is pending. The makers closed the digital deal of Nishabdham for a decent price of Rs 24 crores. The release date of Nishabdham will be announced soon. Ram’s Red and Vaishnav Tej’s Uppena will not head for a digital release. The makers of these films decided to wait and they will head for a theatrical release during Sankranthi 2021.