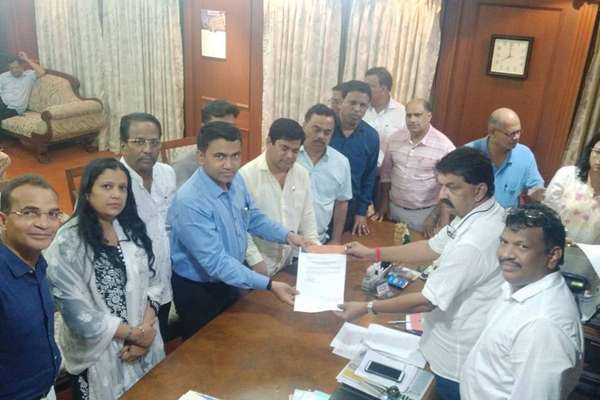 In a major coup, the BJP in Goa late on Wednesday engineered a split in the 15-member Congress legislature party and inducted the 10-member splinter group headed by the leader of opposition Chandrakant Kavlekar into the BJP.

Kavlekar has blamed disunity among senior Congress leaders in Goa and lack of development in the Opposition MLAs’ constituencies as some of the reasons for splitting from the main opposition party. The Aam Aadmi Party in Goa has called the merger a betrayal of Goan voters.

The stunning development takes the tally of BJP MLAs from 17 to 27 in the state legislative assembly.

The development brings down the legislative strength of the Congress party to a paltry five MLAs. It includes Digambar Kamat, Luzinho Faleiro, Ravi Naik, Pratapsingh Rane a” all of whom have served as Chief Ministers a” and MLA Aliexo Reginaldo.

“My office received two requests today. A breakaway Congress group of 10 MLAs wrote to me informing of their split from the party. The CM has also informed me that the group had merged with the BJP and the strength of his party has increased to 27 MLAs. I have accepted both the requests,” Patnekar said.

When asked if the merger was legal, Patnekar said: “I am not a legal expert. Whether it is legal or not, somebody has to see”.

Chief Minister Pramod Sawant said that the merger of the breakaway group would help strengthen his government and help it to perform better.

“A group of 10 Congress MLAs, which forms two-thirds of the Congress legislature party, under the leadership of leader of opposition Chandrakant Kavlekar split from their party and merged their group into the BJP today. The BJP’s legislative strength which was 17 earlier now rises to 27”, Sawant said.

Sawant also said that the merger had been okayed by the party leadership. All newly inducted MLAs are expected to leave for Delhi to meet BJP President Amit Shah.

Kavlekar, who also spoke to reporters at the state legislative assembly complex, also said that one of the reasons for joining the BJP was lack of unity among senior Congress MLAs, because of whom the party could not stake its claim to form a government in Goa.

“We have joined with a positive thought. We had the opportunity in the past to form a government, but because of lack of unity among our senior MLAs, we were not in a position stake our claim,” Kavlekar said.

When asked if he felt it odd that a leader of Opposition should join a ruling party, Kavlekar said: “Apart from leader of opposition, I am also an MLA of a constituency and it is my duty to ensure that my constituency is looked after”.

For now, the BJP-led coalition government has a majority of 33 MLAs, including three MLAs from the Goa Forward party and three independent legislators.

Amid off-the-record claims by BJP’s state leadership that some of the coalition ministers in Sawant’s ministry may be dropped in view of Wednesday’s merger.

Deputy Chief Minister and Goa Forward party president Vijai Sardesai has said that the BJP leadership should ensure that the spirit of the coalition government which was created in 2017 under the leadership of late Manohar Parrikar, with the help of his party, should not be killed.

He also said the only thing which had changed since the formation of the coalition government in 2017 was that former Chief Minister Parrikar was no longer alive.

“Nothing has changed. Only thing that has changed is that Manohar Parrikar is not there. Those (Central) BJP leaders who had talked to us during government formation are still in power and have become more powerful. It is their obligation to see that what is created in 2017 is not killed for any reason,” Sardesai said.

Commenting on Wednesday’s swift political developments, Aam Aadmi Party convenor in Goa Elvis Gome said that the merger was shameful. “There is no opposition or ruling party in Goa. They are all one. Both Congress and BJP have betrayed their voters,” Gomes said.