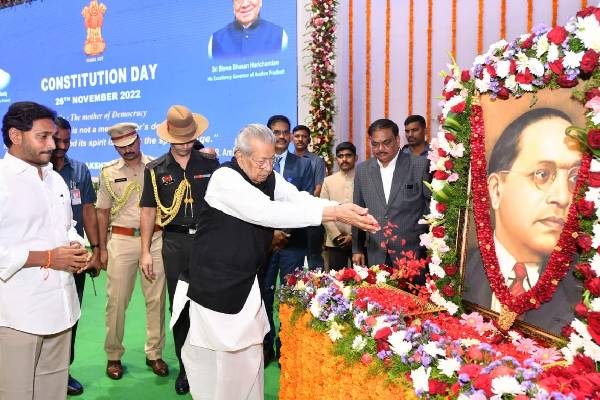 Chief Minister YS Jagan Mohan Reddy has said that the State government has been working for ensuring social justice by implementing various welfare schemes in a most transparent manner by drawing inspiration from the constitution.

Jagan along with Governor Biswa Bhushan Harichandan participated in the National Constitution Day Celebrations held at Vijayawada on Saturday. They paid glowing tributes to the portrait of the Architect of the Constitution, Dr BR Ambedkar.

Addressing the gathering, the Chief Minister said that the Indian Constitution was drafted by Dr BR Ambedkar after studying the constitutions of 80 countries. The Constitution of India is very great and it is the rule book that teaches discipline to all. Our country is mixed with many castes and religions. For 72 years, this constitution has rewritten the history of social groups, he said.

Reiterating that the Constitution stands for the downtrodden, the Chief Minister said that the government is moving ahead with a number of welfare schemes to ensure that all sections are benefited in accordance with the Constitution and standing as a role model for other States. A 125-feet statue of Dr BR Ambedkar will be unveiled here in April 2023, he said.

Andhra Pradesh was the first state in the country which brought revolutionary changes in the society through Grama Swarajyam and by establishing Village/ Ward secretariats, the Chief Minister said, adding that around 50 percent of the nominated posts were designated to the BCs, SCs, STs and minorities.