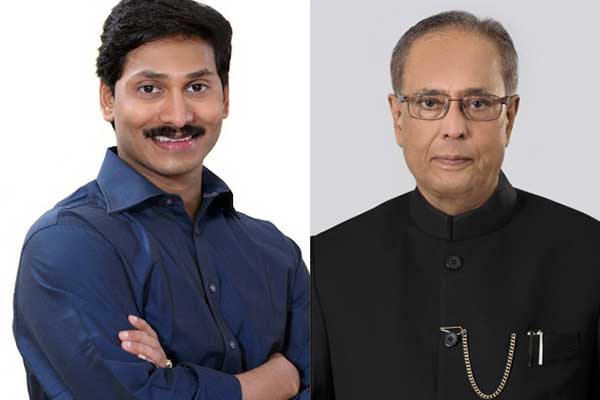 Opposition leader YS Jaganmohan Reddy accompanied by party MLAs today called on President Pranab Mukherjee at Rashtrapati Nilayam, Bolaram, and presented three memoranda on Call Money racket and, special status to Andhra Pradesh and on the delay in the constitution of Tribal Advisory Council by the state government of Andhra Pradesh. He sought President’s intervention in addressing these issues.

The salient points of the memoranda :

* Emboldened by the open support the TDP Supremo and the Chief Minister of AP Nara Chandrababu Naidu has been giving to the TDP cadre ever since he came back as Chief Minister in June 2014, the TDP leaders and their followers, have let lose a reign of terror in the state.

* TDP leaders and cadre have been operating with impunity in the sand mafia, the liquor mafia, the real estate mafia and now the call money racket which has put everybody’s head in shame. This is the most heinous crime and happening right under the nose of the Chief Minister.

* Vijayawada city, which was adopted by Chief Minister as his seat of governance, has turned into a crime capital.

* The gang was busted with the complaint from a woman, who along with her daughter was forced into prostitution after she approached them for money for her daughter’s higher studies.

* It was further revealed that the gang financed two MLAs, MLC according to the facts that have come out so far. Ministers and senior Police officials are also involved with the blessings of the Chief Minister.

* it is evident that the call money and sex rackets are being carried out by the cadre and leaders of the Party in the full knowledge and patronage of the Chief Minister. The Call Money racket is only a front organization with forced sex trade behind the scenes.

* When a woman MLA R K Roja of our Party, naturally agitated at the human rights violation in Vijayawada in the form of forced prostitution and raised the issue in Assembly …She was selectively suspended by Speaker Kodela Sivaprasada Rao on 18th December 2015 for one full year.

* Despite several appeals to revoke the harsh punishment, the Speaker is reluctant and adamant to act.

* Para 4 of the Fifth Schedule of the Constitution of India requires that a “Tribes Advisory Council shall be constituted to advise on such matters pertaining to the welfare and advancement of the Scheduled Tribes in the State”.

* The State Government has not constituted this Council even after a lapse of 19 months after the assumption of office by the new Government only because 6 out of seven Tribal MLAs belong to our Party.

* Direct the State Government to constitute the Tribes Advisory Council as mandated by the Constitution of India.