What are the reasons for the collapse of all systems in Amaravati Capital City? Why have the real estate values touched the rock bottom? The TDP is making fresh allegations that the ruling YCP leaders are deliberately destroying the image of the Capital City only to shake the confidence of property and land owners there. The YCP leaders are thinking that the total value of lands in Amaravati surroundings would be anywhere above Rs 2 Lakh Crore. These values came down by 50 to 60 per cent because of the ruling party’s anti-Amaravati stand.

Opposition leader Chandrababu Naidu told the media that CM Jaganmohan Reddy is trying to do Pulivendula style settlements in the Capital City area but his plans are not working. Naidu told the media that Jagan’s evil plans may work in Pulivendula and Kadapa but not in Amaravati and other places in the state. The ruling party leaders are setting their sights on grabbing lands by creating panic and fear. Against this backdrop, the land owners of Amaravati are now putting all their hopes on Naidu to ensure justice to them. 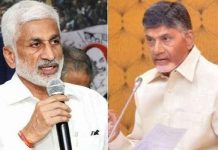