Chief Minister Y S Jagan Mohan Reddy has directed the officials to stop the millers from exploiting the farmers during the paddy procurement by giving them qualitative and quantitative receipts at RBKs while the rest of the process will be done by the custodian officer of the government.

“Generate a random lottery system so millers would not know from which RBKs the grains are coming from,” Chief Minister instructed the officials. “There should be effective coordination between the various departments which helps the RBKs to function smoothly,” said the Chief Minister.

Like the family doctor concept, the Chief Minister also asked the officials to come up with a soil doctor who would give each landholding farmer or tenant a health card to monitor the soil and give them a specific diagnosis.

He said that RBKs should eventually become farmers’ doctors. “Soil tests should be done regularly and health cards to be given to the farmers. Along with health care, RBK should provide advice on fertilizers and crop cultivation suitable for that land,” said the Chief Minister.

The Chief Minister said that the farmers should get the minimum support prices and there should be no role for millers during the procurement process. “Famers should be educated regarding the procurements and MSP by seeing the posters at RBKs. The poster should also have phone numbers for the farmers to report any irregularities,” said the Chief Minister.

He said that RBKs have five kinds of testing including soil and the equipment should be provided along with the training to the staff. He also asked them to establish a weighing bridge at the RBK level so the dependency on the private bridge would be reduced. 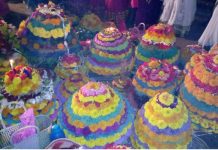