Remember Butchaiah Chowdary’s resignation and revolt against TDP top boss Chandrababu Naidu? He raved and ranted but melted like ice when he met Chandrababu Naidu. He meekly mouthed his dedication and determination to work for the party. What looked like a storm ended up as a storm in the tea cup.

Is Vijayawada MP Kesineni Nani’s decision not to contest in 2024 elections too is a storm in the teacup? Highly placed sources say that it is likely. Nani through a letter indicated that neither he nor his daughter Shweta would be interested in contesting the 2024 elections. He has also asked Chandrababu to look for an alternative to him. This created quite a commotion.

When he wrote this letter, he was out of station. As soon as he reached Vijayawada, his followers and supporters flocked to the Kesineni Bhavan demanding that he take back his letter. Nani told them that he would stand by them and that Kesineni Bhavan would always be open to them. The supporters told him that they cannot imagine a Vijayawada TDP without him. Nani did not give them any assurance but said he would consider his decision.

Sources say Kesineni Nani is upset over party leaders Bonda Uma and Buddha Venkanna for not cooperating with him in the VMC elections. He was showing his displeasure by talking about not contesting in 2024. Finally, the whole drama ended with Nani assuring his supporters that he is yet to take a decision. Thus ended the storm in the tea cup. 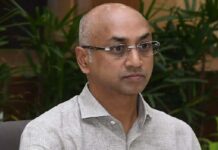