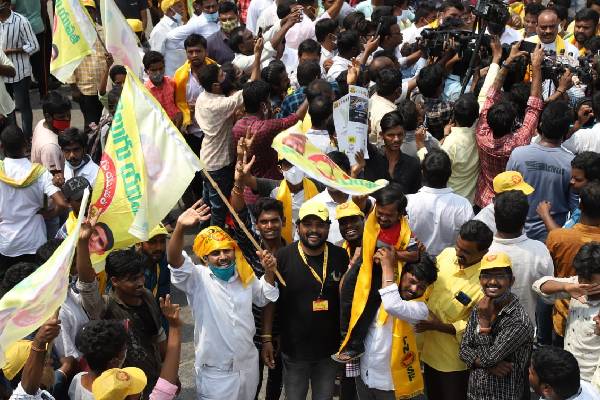 TDP General Secretary Nara Lokesh launched a blistering attack on the ruling YSRCP and gave a call to the voters of Tirupati parliament segment not to send ‘useless persons’ to the Parliament but vote for the TDP candidate who would fight for their cause. He termed the byelection as a battle between the Jagan Reddy Alibaba robbers and the TDP fighters. The YSRCP leaders have looted all resources of the State and did not leave even the TTD whose sacred laddus were put up for commercial sale and distribution in the recent panchayat polls.

Mr Lokesh kicked off his election campaign by holding a door to door padayatra and road show at Varadaiahpalem mandal headquarters town in the Satyavedu assembly segment on Sunday. After offering puja at the Chengalamma temple in Varadaiahpalem, Mr. Lokesh began his padayatra in Toorpu Veedhi, Bazar Veedhi and other localities. He appealed to the women voters to think how the prices of essential commodities were skyrocketing under the present Chief Minister.

Mr. Lokesh gave comparative prices during the previous TDP and the present YSRCP regimes. The prices of sunflower oil, dal and ration sugar were just Rs. 86, Rs. 74 and Rs. 20 under the Chandrababu regime but now they went up to Rs. 200, Rs. 140 and Rs. 34 under the Jagan misrule. Petrol hit a century while diesel too rose to Rs. 93 per litre. A tractor sand went up from Rs. 1,000 to Rs. 5,000 now. He said that there would be no justice for Dalits like Dr Sudhakar who was harassed and branded as mad just for asking for a face mask. Deputy CM Narayana Swamy was insulted by Minister Peddireddy Ramachandra Reddy but Jagan Reddy did not say a word. This was why this Chief Minister should be called a ‘psycho Reddy’ who was bothered about his own wealth creation but not the well being of the State. The so called ‘Navaratnalu’ (nine jewels) of Jagan Reddy have turned into ‘Nava Gulaka Rallu’ (nine gravel stones). Of what use would be the gravel stones for the poor families.

Mr. Lokesh told the voters that the YCP leaders were looting the State resources with their mafia activities in the sand, liquor, mines, TTD, etc. Just small, tiny cash benefits were being given to some sections of poor people only to divert the public attention from the massive corruption going on. The YSRCP would not deserve to win the Tirupati MP seat. The people gave 28 MPs but the Chief Minister had failed to bring special category status that he eloquently promised during the general election.

Nara Lokesh as the part of the promotions of Tirupathi parliament by-elections went to satyavedu and held a road show and door-to-door campaign. Along with Lokesh, other party members are also taking part in promotions.

Lokesh said that TDP MPs are always working on people’ problems but YCP MPs are useless. He asked to help Panabaka Lakshmi win the elections as she solves the problems of the people and also he asked people to being down Jagan to the ground level.