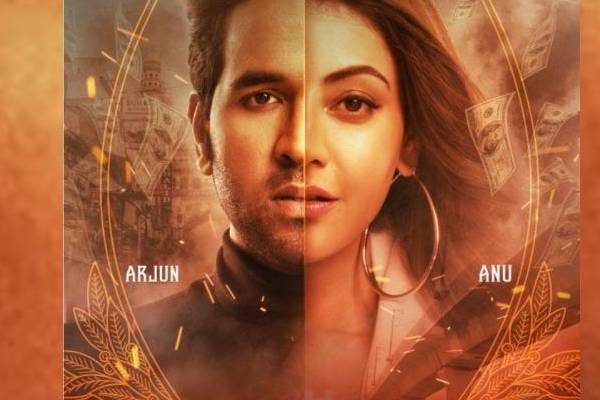 Manchu Vishnu needs a solid hit and there are no takers for the actor. He took his time and is focused on Mosagallu, a big-budget film that is based on the biggest IT scam in the world. Made on a budget of Rs 51 crores, the film is directed by Jeffrey Gee Chin. Top actress Kajal Aggarwal plays Vishnu’s sister in the film and Suniel Shetty, Naveen Chandra and Navdeep will be seen in other important roles. Sam CS composed the music and Vishnu’s 24 Frames Factory are the producers. The film released today and here is the complete movie review of Mosagallu:

Anu (Kajal Aggarwal) and Arjun (Manchu Vishnu) are siblings and they are born in poverty. They dream of earning big in life. They come up with a formula that cheating the rich is never a crime. Arjun works in a call centre and is well bonded with his boss Sandeep Reddy (Navdeep). Anu, Arjun and Sandeep join hands for the biggest ever scam. They earn thousands of crores which gets traced by the USA government. The rest of Mosagallu is all about the scam of Rs 2600 crores and what happens next. DCP Kumar Bhatia (Suniel Shetty) is the special officer who is assigned the duty to nab the masterminds behind the scam. Watch Mosagallu to know about the real facts:

Any crime thriller should be backed by a strong logic and interesting screenplay. The crime should be explained in detail and it should impress the audience. Mosagallu which has a good plot lacks interesting narration and it misses the needed logic. The entire scam happens on a laptop screen and the lead actors turn rich in a fraction of seconds. Everyone is well aware of the American security system and the laws along with the strict rules of the government. The USA government holds the information of any crime that happens across the globe. But the lead actors in Mosagallu cheat hundreds of Americans so easily.

The team of Mosagallu should have worked well in detail about the scam and the format to be narrated. DGP’s acts to catch the culprits are shown in a silly manner. Along with this, the entire film is completely predictable and has no twists that leave the audience in surprise. By the time the interval episodes are around, the audience will feel that they are done with the film and the second half offers nothing exciting. Manchu Vishnu announced that he spent Rs 51 crores on the film but Mosagallu never sounds so. The second half is a complete disappointment and misses many logics.

Manchu Vishnu is good in his role and Mosagallu is a new genre for the actor. The entire story revolves around Arjun. Kajal looks beautiful in the small role and she hardly has any prominence. The team of Mosagallu should have worked on her role. Suniel Shetty is roped in for a pan-Indian appeal but his role is not impressive. Navdeep is good in his role and Naveen Chandra fails to make an impact. All the other actors had limited screen presence.

The basic plot of Mosagallu is good but there is no need for a Hollywood director to helm this film. The background score is good and it elevated some of the episodes. Though Manchu Vishnu said that Mosagallu is made on Hollywood standards, the cinematography work, editing and production values are below par and are no match to Hollywood flicks. Mosagallu is a huge misfire as it lacks a gripping narration, interesting twists and strong characterizations.

Mosagallu is one more dud from Manchu Vishnu and it can be given a skip.

No increase in Assembly seats in AP, TS till 2026: Centre