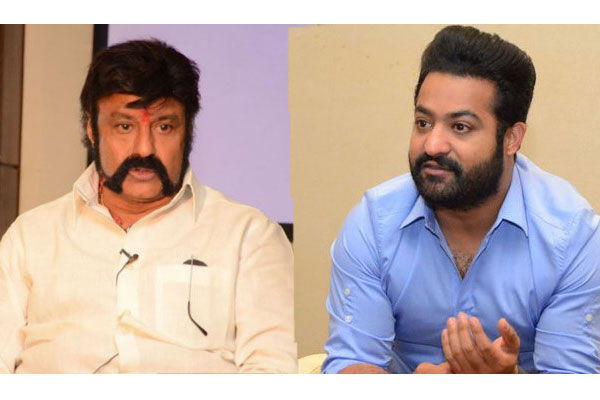 Nandamuri fans had to be divided into parts after the drift between Nandamuri Balakrishna and NTR Jr. Despite of several attempts made by NTR, the issue never got resolved as Balayya was not in a mood to patch up. However the demise of Nandamuri Harikrishna brought Balakrishna and NTR on to one platform. NTR’s recent outing Aravinda Sametha Veera Raghava released recently and is running successfully all over.

The makers wanted to celebrate the success in the presence of the fans during which Tarak felt that Balakrishna attending the event as Chief Guest would bring extra mileage for the film and will cheer up Nandamuri fans. He asked Kalyanram to arrange a personal meeting and NTR met Balakrishna as per the planned time. NTR personally convinced Balakrishna and requested him to attend the event without fail.

Balayya was extremely convinced for Tarak approaching and requesting him. With nothing to avoid, he stepped out with a positive nod and this is how a meeting left Nandamuri fans in extreme delight. Balakrishna and Kalyanram are attending the success meet of Aravindha Sametha Veera Raghava as Chief Guests. Trivikram directed the film and Haarika and Hassine Creations produced this action thriller.