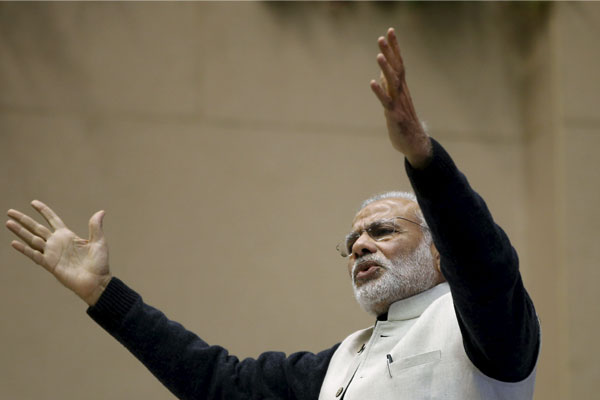 Indian Prime Minister Narendra Modi may look to press the reset button on his leadership this spring to reinvigorate stalled economic reforms and appease critics, eyeing a mix of tried and tested allies and fresh blood, senior government sources said.

The government has overseen rapid economic growth but failed on tax and land reforms, and the euphoria that met Modi’s 2014 election triumph has given way to investor disillusionment; Indian stocks have erased all of their gains since he won power.

The ruling Bharatiya Janata Party (BJP) faces a crucial election test in the most populous state of Uttar Pradesh in 2017 that it probably needs to win if it wants to hold on to power nationally in 2019.

“Modi needs to identify new talent and bring changes in his government. It will be too late if he fails to do it now,” said veteran newspaper editor and commentator Shekhar Gupta.

With an eye on Uttar Pradesh, Modi looks set to keep Amit Shah on as BJP president, the sources said, extending his closest aide and election campaign manager’s tenure by three years when it expires at the weekend.

But Finance Minister Arun Jaitley, responsible for delivering the Modi message to international investors, may move to defense after he delivers his annual budget in late February, sources said.

Jaitley, 63, has failed to push through a major tax reform and critics have faulted his stewardship over India’s $2 trillion economy, which is growing fast but not creating enough jobs to employ an expanding workforce.

A spokesman for Modi declined to comment on the move and an official in Jaitley’s office said he had no knowledge of a possible reshuffle.

Moving Jaitley to defense, a post he also held in the early months of the Modi government, could better suit the veteran corporate lawyer and keep the strategically important portfolio in trusted hands.

It would also open the way for power and coal minister Piyush Goyal to take the finance portfolio, while underperformers in other minor posts may be weeded out.

A federal minister and two BJP officials said Goyal, 51, was being groomed for his next big role, and a white paper on banking was recently shared with him to seek his inputs. A Goyal aide denied all knowledge of an impending promotion.

Goyal is a good communicator and has often traveled abroad with Modi, but lacks political and electoral experience.

Those are key wins for Modi, whose provision of 24/7 electricity as chief minister of Gujarat state helped him become prime minister.

“Goyal is doing a fine job – he has brought a lot of energy to the coal and power sector,” said Rajiv Kumar, senior fellow at the Centre for Policy Research in New Delhi.

“But I’m not sure he can do justice to the complex finance portfolio,” he said. “Goyal, with his micro orientation, might struggle to get to grips with multi-dimensional and serious macroeconomic issues facing the country.”

Modi, who has relentlessly centralized power in the prime minister’s office, has held his cards close to his chest and would have the last word on recruiting new talent from a pool of candidates that is short on experience.

Shah, Modi’s right-hand man in Gujarat and the architect of his general election triumph, lost his winning touch last year with a heavy defeat to an upstart party in Delhi and a crashing loss in the big eastern state of Bihar.

That has tested the patience of the ideological parent of the BJP, the Hindu nationalist Rashtriya Swayamsevak Sangh (RSS). But, apart from a brief rebellion by party elders, Modi has managed to fend off challenges to his authority.

At a meeting between BJP and RSS leaders earlier this month in New Delhi, Modi made his support for Shah clear. No challenger has applied for the post, meaning that Shah’s term that expires this weekend will be extended by three years.

While party workers praise Shah as a tough and effective administrator, many want him to promote new faces instead of, as he has done, focusing his campaign strategy exclusively on Modi.

Even though Modi addressed more than 30 rallies on the campaign trail, the BJP fell in Bihar in November to an alliance of regional parties. Realising its fate was sealed, it did not even field a candidate for chief minister.

The party’s fortunes will depend on five state polls in 2016 that will build up to next year’s crunch vote in Uttar Pradesh. The outcome of that ballot will set the tone for the 2019 general election.

Shah helped Modi win the biggest general election mandate in three decades by sweeping 71 of 80 seats in the northern state, whose 200 million population is as big as Brazil’s.

“If Shah wins Uttar Pradesh, then no one can stop Modi from becoming the prime minister again,” said one senior BJP leader.