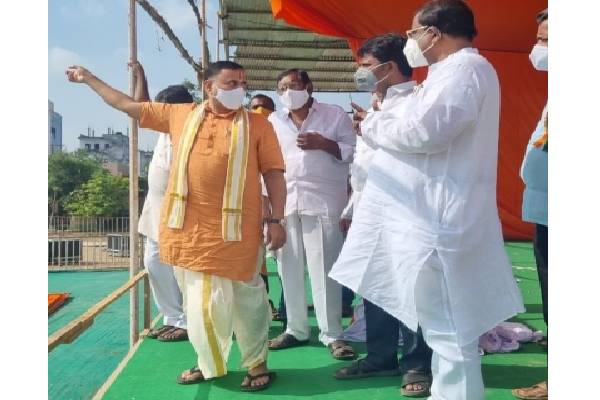 Nadda will visit the temple at 2 p.m.

Deodhar said Nadda will address a BJP-Janasena rally at Naidupeta at 6 p.m., even as Coronavirus second wave is raging in the southern state.

On Sunday, the AP co-incharge took stock of the preparations being made for Nadda’s rally along with AP BJP president Somu Veerraju.

Meanwhile, the AP BJP co-incharge trained his guns at the Yuvajana Sramika Rythu Congress Party (YSRCP) candidate’s religion, alleging that he is a Christian.

“You can’t cheat the people of AP like this. We will follow the matter even after polling. This is breach of Constitution which clearly says Christians can’t contest from SC-reserved seats. You are backstabbing SCs. BJP-Janasena will expose your hidden agenda,” he alleged.

Deodhar shared a few pictures of YSRCP candidate M. Gurumoorthy receiving blessings from a pastor in a church.

However, similar allegations have also been against BJP’s candidate Ratna Prabha.

Despite these efforts, it was noticed in the recent rural and urban local bodies polls that religion and alleged temple attacks politics did not play any role and the ruling party went on to register landslide victories.

According to the BJP leader, people are not happy with the TDP and YSRCP because they did not fulfil their promises.

“Horrible roads too, like how they’re across rural areas of AP,” he said.

Meanwhile, people may look out for Nadda’s speech if there will be any reference to delivering on the demands of special category status, railway zone, Visakhapatnam Steel Plant (VSP) and other bifurcation promises.