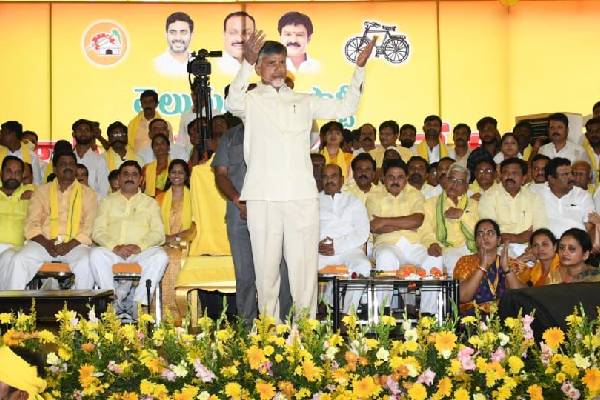 TDP chief and leader of opposition N Chandrababu Naidu termed it as ‘not surprising’ that all people from Srikakluam to Kurnool were raising ‘CM’ slogan on seeing him during ‘Badude Badudu’ road shows.

Naidu said that the Chief Minister chair was nothing new to him and that he had served in that capacity for over 14 years. However, the people were eager to see him as CM again soon so that their problems would be solved.

Addressing a meeting of district party activists in Anantapur, Naidu said that all sections were convinced now that the TDP should come back in order to save Andhra Pradesh from destruction and lawlessness. If the TDP won in 2019, the State would have become No 1 in the whole country in many respects by now.

The TDP chief pointed out that Anantapur district has been a stronghold of their party since the days of NTR. In 2014, the TDP won 12 out of 14 assembly seats in Anantapur district. But in 2019, even the people of this district have fallen into the trap of Jagan Mohan Reddy. With his promises and kisses, Jagan Reddy won over voters and came to power but started giving blows to them once he became CM.

Chandrababu Naidu said that AP was known for its abundant human resources. The Krishna and the Godavari rivers were big boons. The State’s coastline had huge scope for development and prosperity. Yet, the YCP Government had deliberately destroyed the State in all aspects.

Naidu said the people voted for Jagan Reddy along caste, religious and regional considerations. Some had considered his father’s rule also. The fact was that Rajasekhara Reddy had some fear and respect for the people and the Assembly. YSR used to lower his tone when the TDP questioned his policies.

The TDP chief deplored that Jagan Mohan Reddy had no respect for any constitutional institutions, leave alone the Assembly. They went to the extent of passing inappropriate comments on the character of family members. “This was why I boycotted the Kaurava Sabha. I will return only after turning it into a respectable Gaurava Sabha.”

Naidu recalled that over 30,000 jobs were created when the TDP brought Kia Motors to Anantapur. Did the Jagan rule bring one single industry? Moreover, the YSRCP goons had chased away the Jockey factory from the district. J-brands of liquor were only meant for filling the pockets of Jagan Reddy.

Chandrababu Naidu said the anti-Government feelings were on the rise day by day. When the TDP activists were making one step forward, the common public were taking ten steps in the cause of restoring glory to Andhra Pradesh.