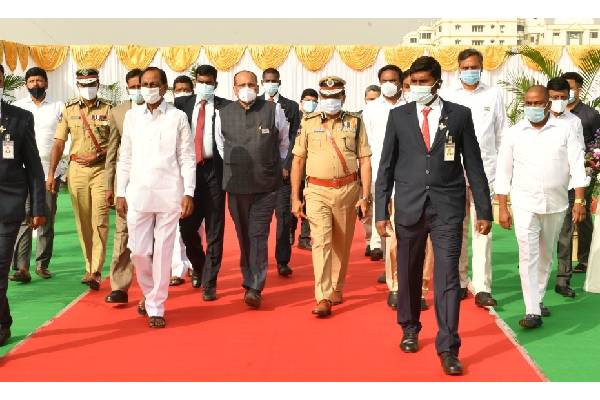 The celebrations, however, were low-key due to restrictions on public gatherings to check the spread of Covid-19.

Governors of Telangana and Andhra Pradesh led the celebrations by unfurling the national flag at main official functions in their respective states.

Telangana Governor Tamilisai Soundararajan unfurled the Tricolor at the ceremony held at Raj Bhavan, the official residence of the governor. The event was held with Covid-19 protocol. Like last year, there was no march past, no parade review by the chief guest, no tableaux or cultural programmes by school children.

KCR, as the chief minister is popularly known, paid floral tributes to the photographs of Mahatma Gandhi and Dr B.R. Ambedkar, the architect of the Indian Constitution. Several public representatives, chief secretary, director general of police and top officials participated in the Republic Day celebrations.

Later at the Army Memorial at Parade Grounds in Secunderabad, the chief minister paid floral tributes to the martyred army personnel by lighting a lamp.

The Republic Day celebrations were held across both the states. Flag hoisting was organised at government offices, high courts and offices of political parties.