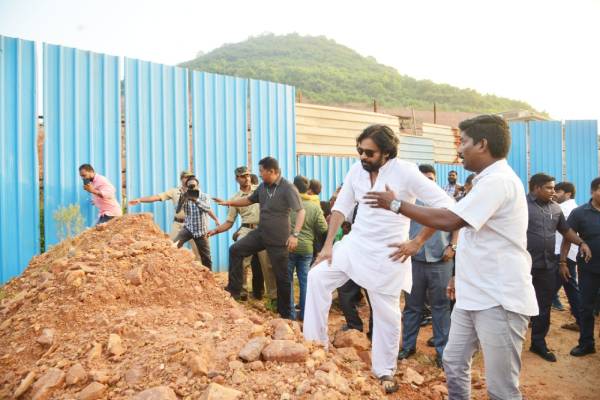 Jana Sena chief Pawan Kalyan had visited the Rushikonda hill in Visakhapatnam on Saturday. He watched the on-going construction works on the hill undertaken by the State government. He watched the area from the top of a small mountain on the roadside.

Pawan Kalyan also enquired about the works on the hill and interacted with the local people on the environmental damage being caused by the construction work.

Later, he visited the Visakhapatnam beach along with party political affairs committee chairman Nadendla Manohar. The two interacted with the local fishermen about their living and the support given by the state government to the fishermen community.

The layout was provided with borewells and electricity supply besides levelling the plots. Assembly deputy speaker, Kolagatla Veerabhadraswamy, welcomed the Jana Sena chief to visit the colony. He said that the government had started the construction of houses in the colony for the poor.